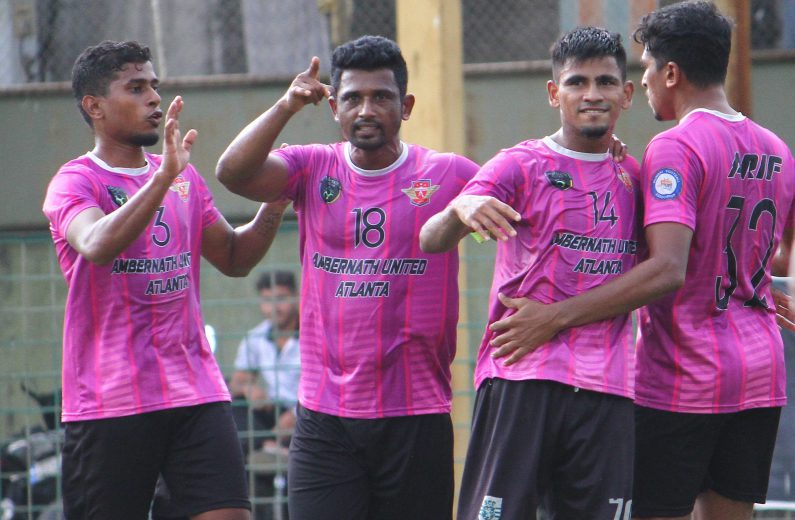 Prior to kick-off, Sellebrity FC gave a guard of honour to Ambernath United Atlanta FC for becoming the MFA Elite Premier League champions.

Sellebrity FC drew the first blood early in the game as Brendan Pires found the back of the net in the 4th minute. Sellebrity FC kept good possession of the ball in the opening minutes and Kaustubh Ravindra passed the ball to the final third as Brendan collected it and slotted it home to give his side the lead.

After going down early, AUA FC gained control of the game and kept pushing for the leveler. All their hard work paid off when Shravan Shetty drew the game level for the league leaders in the 22nd minute. Ajikumar passed the ball to Shravan who made a darting run through the Sellebrity defence to score the equaliser.

4 minutes later, the top scorer of the league – Alister Anthony gave AUA FC the lead with his 21st goal of the campaign. Aaron from the middle of the park passed the ball to the attacking third. Alister collected the ball on the left, made a solo run, dribbled past Sellebrity defenders, and took a shot inside the box that ended up in the back of the net.

After going down, Sellebrity FC had no answer against a solid Ambernath United Atlanta FC defence as they went into the tunnel trailing by a goal. At halftime, the score was 2-1 in favour of AUA FC.

In the second half, the Steven Dias-coached team kept matters in their own hands as they were in no mood to let their lead slip away.

In the 74th minute, the 2nd top scorer of the league – Arif Shaikh scored the all-important 3rd goal for his side and ensured all three points for his side. Alister from the left passed the ball into the box and Arif finished it off to score his 18th goal of the season.

Sellebrity FC could not find a consolation goal as AUA FC registered 17 wins in 17 matches to end their MFA Elite Premier League campaign with a 100% win record.

Throughout the campaign, AUA FC had scored 77 goals and conceded only 5. As of now, PIFA Colaba and Oranje FC are in the second and third position of the league with 34 and 32 points respectively.