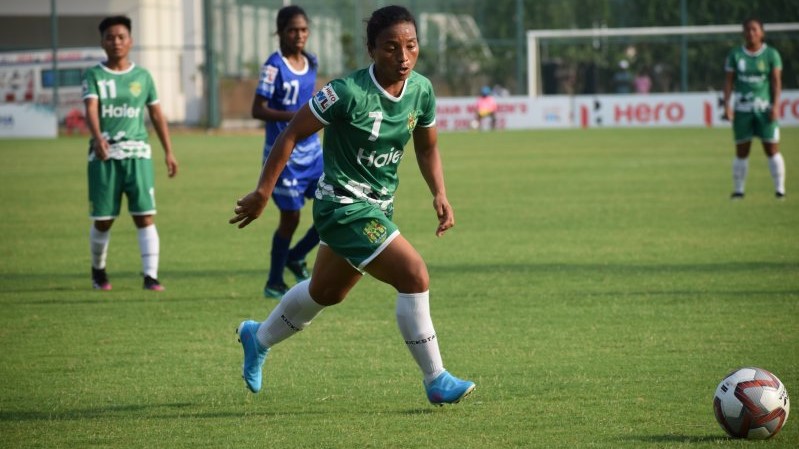 The Hero Indian Women’s League, over the years, has brought to the fore, a number of talented youngsters, while it has also seen a few veterans dominate the scene at their respective clubs. One such veteran who has been turning heads over the five seasons of the Hero IWL is Kickstart FC forward Irom Prameshwori Devi.

The Kickstart forward, who has been a part of the Blue Tigresses in the past, is a two-time Hero IWL winner with Eastern Sporting Union (2017) and Gokulam Kerala FC (2020). She helped Manipur to win their 21st Hero Senior Women’s NFC title and also was named the most valuable player in the tournament this season. Now at Kickstart, Prameshwori is helping the Bengaluru club secure a top-three spot on the table.

“It’s the second Hero IWL for Kickstart, and I’m playing in this club for the first time. Yes, we lost to Gokulam and Sethu, and the title race is now between them, but we will still like to win our last remaining match and finish in a strong third position,” Prameshwori said to the-aiff.com.

Now at the age of 33, Prameshwori may be at the twilight stage of her career, but the tricky attacker is planning to remain within the beautiful game in her native village, Kang Samaram, in Manipur.

“Of course, once I’m done with my playing career, I would like to give back to the sport. But it’s not as high profile coaching. I want to start off at the grassroots level. Whatever footballing knowledge I’ve gained over the years, I’d like to impart to the young kids in my locality,” Prameshwori quipped. “There are so many kids who come to our village ground to play and whenever I’m there, they ask me different things.”

“I’ve played for different clubs over these last 5 seasons of Hero IWL, and there has been so much improvement over the years in women’s football. I feel that now with the new league format, the Hero IWL will also help improve the level of women’s football further, and we will see many more talented players coming out from this league,” she opined.

“There have been plenty of changes since I started playing. There were a lot of logistical challenges before, but we don’t face those anymore. There are a lot of age-group teams. There’s so much improvement in the players as well,” she said. “There’s so much variation in different types of players as well. We get to improve ourselves quite a lot. All the youngsters that are coming up, I’d like to tell them to work hard. There has been so much improvement nowadays.”

The 2021-22 season of the Hero IWL is all set to wind down to a grandstand finish with Sethu FC and Gokulam Kerala level on 30 points apiece at the top of the table. A draw would be enough for Gokulam to defend their title (the Malabarians are ahead on goal difference), while Sethu need the three points to claim their second title.

“The last match will be like a final, and it will be quite unpredictable. Both teams have been quite even so far and have played really well. There’s a lot of excitement for the last match, and I feel that all the fans that are following the Hero IWL, will get a good match. We will also watch with a lot of excitement. So far, I think Gokulam is a bit stronger,” stated Prameshwori.