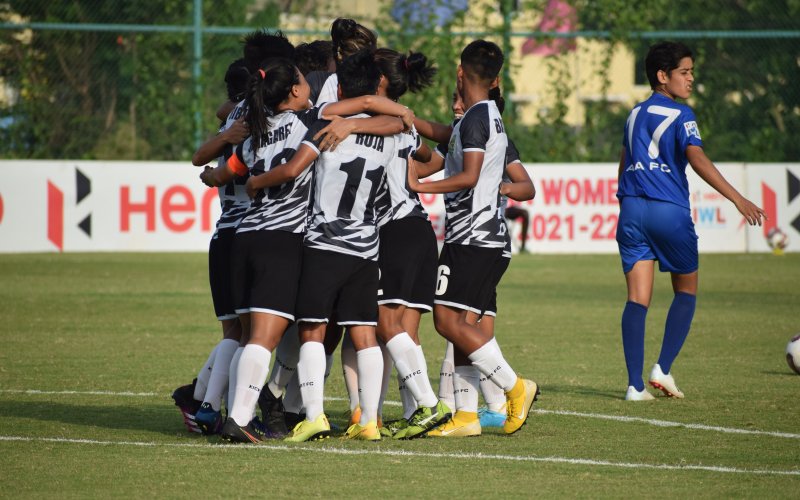 Kickstart FC defeated ARA FC by a 3-0 scoreline in the ongoing Indian Women’s League at the 7th Batallion ground yesterday. The win helped the side consolidate the third position on the points table. A brace from Yumlembam Pakpi Devi (47’, 65’) and a third goal from Thingbaijam Babysana Devi (75’) was enough to ensure a comfortable victory for the team.

The game started on an even basis with both teams looking to get the upper hand. Babysana started the game well and fed a wonderful through ball to Prameshwori and eventually, the shot from Roja had hit the crossbar. Kaviya was next to test the goalkeeper but her long-range shot was easily saved by Manisha in goal.

There were not many clear cut scoring chances for either outfit in the first 45-minutes of the match. Despite their best efforts, both teams went into the halftime break without scoring a goal. The team talk in the break seemed to have done its job as Kickstart emerged as a motivated side in the second half.

The outfit from Bengaluru instantly went into the lead,thanks to Yumlembam Pakpi Devi who scored two minutes after the break with a powerful header. She extended the lead five minutes after the hour mark with her second goal of the match. Latching on to a cross from Parmeshwori, she scored with a drive into the top corner.

Chances of a comeback ended for ARA FC as Babysana Devi scored a third at the 75th-minute mark. A professional display by Kickstart FC for the remaining of the match meant that ARA FC could not create enough chances and reduce the deficit. The game ended three goals to nil in the favour of Kickstart, earning them the full three points.