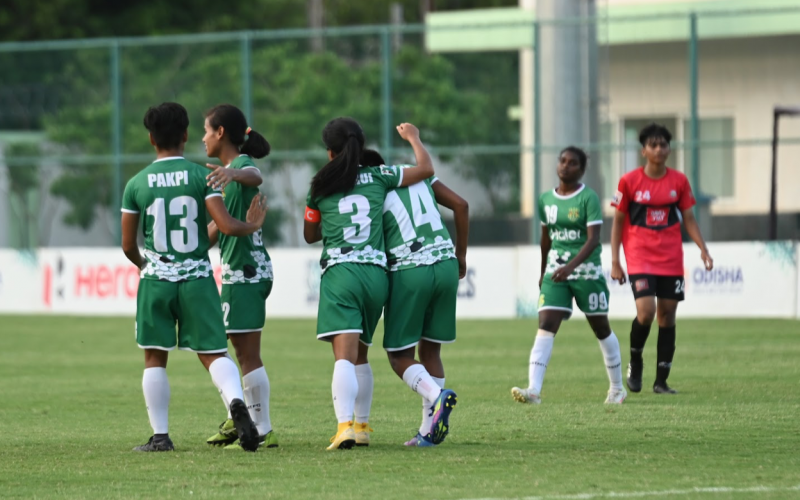 Kickstart FC bounced back to winning ways with a splendid 10-0 victory over Mata Rukmani in the Hero Indian Women’s League 2022.

Yangoijam Kiranbala Chanu opened the scoring for the Karnataka-based club in the 11th minute. The forward turned the ball in from the left hand side of the goal to make it 1-0. From then onwards, Kickstart never looked back.

In fact, they added five more goals in the span of the next half hour. Kiranbala Chanu added her second only two minutes after her first strike with a perfectly-placed header from the left side off a Yumlembam Pakpi Devi cross.

Another couple of minutes passed and Kickstart made it 3-0 via an Asem Roja Devi stunner. The forward took her chance from long range and struck well to beat the goalkeeper from outside the box. Roja Devi went on to score her second in the 37th minute. The in-form attacker tapped in a perfectly delivered cross from the left flank by Kaviya Pakkirisamy.

With the game completely in their hands, Kickstart showed the hunger to score more. In the 42nd minute, Babysana produced a moment of brilliance with a long range screamer to make it 5-0. Before half time, Kiranbala Chanu completed her hat-trick with a strike from close range to beat the Mata Rukmani goalkeeper.

Despite confirming the three points with a dominant first half display, Kickstart went on to add more to their goal tally on the day. Thingbaijam Babysana Devi, scored her brace in the 49th minute, after a massive effort from Kiranbala Devi in the attacking third.

In the 83rd minute, Pakpi Devi showed pure pace and quality on the ball. The forward beat the Mata Rukmani goalkeeper in a one-on-one situation and slid the ball into the bottom right corner. Minutes later, Kiranbala Devi completed her quadruple in the 87th minute with an easy tap-in off a Pakpi Devi assist. Before the referee blew the full-time whistle, substitute Laishram Bibicha Devi scored Kickstart’s 10th goal and marked a solid end to the game.