“Mumbai made me realize my dreams” – Ranjeet Pandre 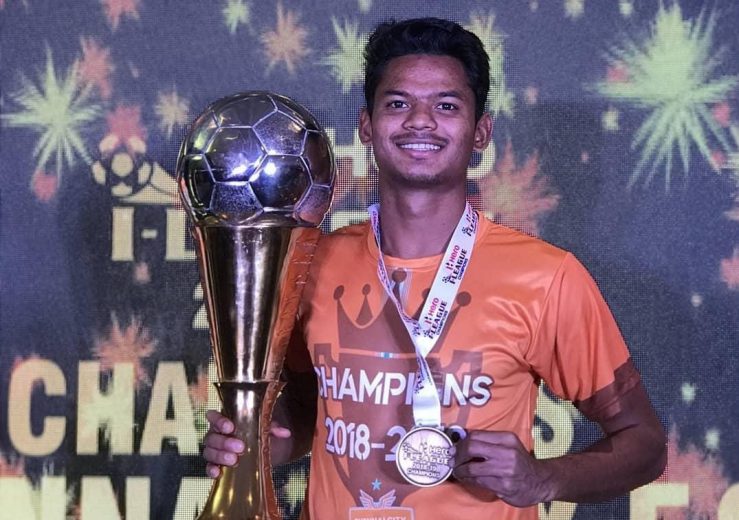 For 27-year-old Ranjeet, this year’s I-League turned out to be a career changing affair. The centre forward played a decisive role in Kenkre FC’s first I-League campaign, and was one of the finest players for the team.

His performance earned him a selection to the All Stars FC – a team consisting the Best XI from I-League and Santosh Trophy. They played against the Indian National team yesterday, where Ranjeet made it to the playing XI.

In a fireside chat with FootballCounter, he opens up about his early days in Madhya Pradesh, his transformation in Mumbai, winning in Chennai, and his learnings at Kenkre FC.

Tell us about your early days?

I started playing football at my school, Weidner Memorial in Rajnandgaon, Chhattisgarh. When I was in my VIIth grade, I got selected in the senior school team. Every year, our institute organised the Weidner Cup, a tournament that received massive support from all. Everyone aspired to play in the finals, and I was lucky to get the opportunity at an early age. That is where my love for football began. After a good start, I represented my alma mater at national competitions like the Subroto Cup. Later I played the Santosh Trophy for my state.

I developed my abilities in Chhattisgarh and was seeking better opportunities. My seniors – Sanjeev Verma (Footballer at Bank of India) and Krishna Naidu (Footballer at Central Railway) – suggested that I try my luck at Mumbai. I appeared for Union Bank trials and was fortunate to be selected. Julian sir and Ryan sir were the coaches back then and under their able leadership we finished third in the league. I spent a year at Union Bank. The experience gave me the confidence to take a leap and my professional football career took off.

I was selected directly to Chennai City FC after I played the state league. I must say luck played a role and my sacrifices bore fruits in 2018-19. What a season it turned out to be. We won the I-League!

Our team played beautifully. Everybody had to fight for the first XI and take up different roles as per the team’s requirement. I played as a winger and wing-back despite being a forward. It remains a dream come true moment for me to win the league with Chennai City FC. Undoubtedly, it is one of the biggest highlights of my career so far.

After winning with Chennai City, I came back to Mumbai and played for Kenkre FC in the Second Division League. My goal against Kerala United was the best moment. We won the league and qualified for the I-League.

Throughout this I-League season, we were a disciplined unit. I feel we lacked in some areas. We failed to combine as a team in the first phase and luck did not favour us. Overall, it was a great experience to represent Kenkre FC and I look forward to the upcoming season.

Selection in I-League All Stars

I feel proud to get selected for the I-League All Stars team. The exposure of playing against the Indian national football team gave us the opportunity to showcase our capabilities and help the national side to prepare for the Asian Cup qualifiers.

Like all, I aspire to play for the Indian football team. I am leaving no stones unturned to achieve my dream.