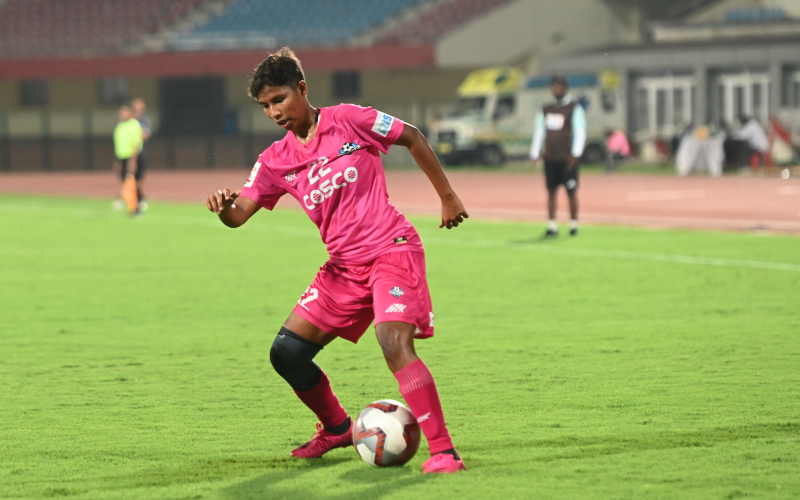 “When life gives you a second chance, you make the most of it!”

While many have heard that saying, Sethu FC’s Devneta Roy is someone who is trying to prove it right through her endeavors in the beautiful game.

Hailing from a family of farmers in Hooghly, West Bengal, Devneta has high hopes for her life. She started playing football when she was in school to fulfil her father’s dream.

“My father used to be a football player in his earlier days but due to lack of money, he couldn’t pursue his dreams. So, I took up the challenge to fulfil his dreams through mine.”

While Devneta was one of the few girls to play football in her village, her coach leaving the local academy meant that she could not train there any longer. However, her father helped her out in such circumstances.

“My father did not lose hope. Some days, I used to feel to give up football and concentrate on my studies. But a few days later, in an exhibition game, another coach saw my game and called me to train in his academy,” she said. “Since then, I’ve never looked back. My father used to travel with me all the way on trains. Whatever I have become today is just because of the sacrifices of my father.”

Devneta started her career in Bengal and got called up for India in 2018 for the BRICS U-17 Football Tournament in South Africa. Then she played the SAFF U-18 Championship in Bhutan and lastly, she participated in the AFC U-19 Women’s Championship Qualifiers in Thailand where India thrashed Pakistan by 18 goals.

“When India vs Pakistan game happened, we all were motivated to another level to win and create a record, so I scored 5 goals out of the 18. I did not have much experience of playing for India, but I followed my heart and got the results,” she smiled.

“In my village no one used to believe in me, they wanted me to get married, but my father kept ignoring them and told me to play as long as I want. And then when I played for India and scored goals, the perception changed,” she informed.

Devneta is on the verge of completing her graduation this year. Apart from balancing football, studies, and fulfilling her father’s dream, she also has another dream to achieve.

“My family and I loves travelling a lot, and my dream is to take my parents to their favourite destination with my earnings.”

Devneta, who had begun representing India at the junior level as an attacker would have had her path charted out before her, but a knee injury in 2019 came as a huge barrier. However, the young striker is not one to bow down to adversities.

“I got my knee injury in 2019 and I gave up on football. After three months I got operated and it took two years for me to recover. People say if you haven’t seen your bad days, then you won’t realise how strong you are,” she said.

“How the world treats you in those days which I have experienced then is a revelation. I got to see the worst days of my life, but I am still playing today, and that counts for something. I want to do something for my family.”

Having netted three brilliant goals and helped her teammates with an assist, Roy seems to be unhappy with her performance.

She said, “I am never satisfied with my goals or my performances. I think and tell myself that I need to do much better than this because if I start thinking that I did my best today then I know for a fact that I won’t perform in the next game. So, I mentally tell myself the best is yet to come, and I have to push harder.”