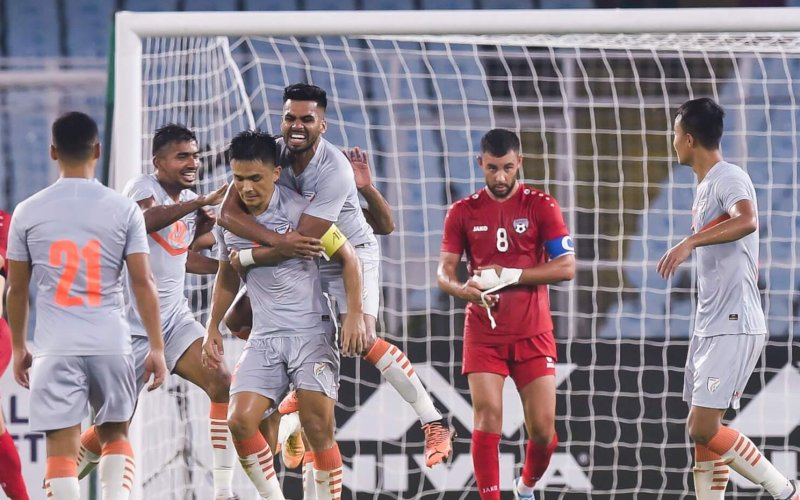 India produced a dramatic 1-2 victory against Afghanistan in their second match of Group D in the AFC Asian Cup Qualifiers 2023 at the VYBK Stadium on June 11, 2022, with Sunil Chhetri and Sahal Abdul Samad scoring for the country in the 86th and 90+2nd minute respectively.

The match started at a very high tempo as both Afghanistan and India tried to press high up the pitch and stamp their authority on the match. There was no room to breathe in the middle of the park and it was the case during the entirety of the match. The first significant action came in the 6th minute when Manvir Singh got past a couple of players and made his way into the box but a brilliant tackle stopped the forward in his tracks. India piled on the pressure, earning multiple corners in the opening 10 minutes but Afghanistan was able to defend them.

In the 12th minute, Liston Colaco got the opportunity to take a shot at a goal from a free kick but his effort was way off-target. The first big opportunity came right after the 15-minute mark when Jeakson Singh got on the end of an inswinging delivery from a corner kick but he could not guide the ball on target from the near post. In the 20thminute, Afghanistan got their first chance of the match to threaten the Indian goal. A wonderful diagonal ball found Kouhyar on the left but the danger was defused by a brilliant tackle from Suresh Singh Wangjam.

In the 23rd minute, tempers started to flare as Ashique Kuruniyan brought down Afghanistan skipper Farshad Noor but it was the latter retaliation which resulted in him getting booked by the referee. After that, things again cooled down as India controlled the match with more possession of the ball, and more chances but unfortunately for the Blue Tigers, they could not convert any of the chances.

Right before the interval though, Chhetri came closest to opening the scoring. Manvir Singh put in a cross from the right, Chhetri was able to chest it down, chip it over Afghan defender Haroon Amiri inside the box and attempted a scissor kick but unfortunately, he was not able to connect it as well as he would have liked to, Another major concern was when it looked like Sandesh Jhingan injured his calf. However, the Indian defender soldiered on as he came back onto the pitch.

After the break, Afghanistan came out with the intent to win the match and put India on the back foot. Farshad Noor took a shot from long range but his effort was way over the bar, causing no problems to Gurpreet Singh Sandhu. India’s biggest chance until then came in the 50th minute when Ashique crossed a ball towards the far post towards Manvir who headed the ball back across towards Sunil Chhetri but the Indian skipper missed the mark from just a few yards out and Afghanistan survived a huge scare.

In the 56th minute, coach Igor Stimac decided to go on the offensive as Brandon Fernandes was brought on for Liston Colaco. In the 62nd minute, it looked like Afghanistan would break the deadlock when Omid Popalzay crossed the ball in for Ahmad Haydary but the header was off target from six yards out. Neither team were able to bring on the finishing touch which was needed until the dying embers of the game. In the 68th minute, Glan Martins came on for Jeakson Singh who proved to be a brilliant defensive shield.  In the 73rd minute, Anwar Ali missed a golden opportunity to bag his first goal for India when he headed the ball off target from close range.

It looked like neither team would be able to break the deadlock but then, it was Sunil Chhetri, who once again came up with the goal. India won a free-kick on the edge of the box courtesy Ashique Kuruniyan who was brought down in the 84th minute. Sunil Chhetri stepped up and curled the ball past the wall and into the back of the net to send the crowd into wild celebrations. However, those celebrations were short-lived as in the 88th minute, Afghanistan equalised when a corner for them found Zubayr Amiri unmarked at the near post who came up with a thumping effort.

In the 89th minute, Sunil Chhetri and Manvir Singh were brought off, while Udanta Singh and Sahal Abdul Samad came on. Ashique was a constant menace for the Afghanistan defence throughout the game and he was also responsible for Omid Musawi being booked in the 90th minute. However, his biggest contribution was yet to arrive. After some pinball stuff at the edge of the box in stoppage time, the ball fell to Ashique. With defenders closing down on him, he slipped in a scintillating through ball for Sahal Abdul Samad who slotted the ball into the bottom left corner from a tough angle to give India all three points and bring ecstatic scenes at the VYBK Stadium.

With this win, India moves level on points with Hong Kong, with both teams tied on 6 points in Group D. India will face their direct opponents for the top spot in the group on June 14, 2022, when they take on the aforementioned Hong Kong at the VYBK Stadium at 8.30 PM (IST).