Igor Stimac stresses on staying composed ahead of Afghanistan clash 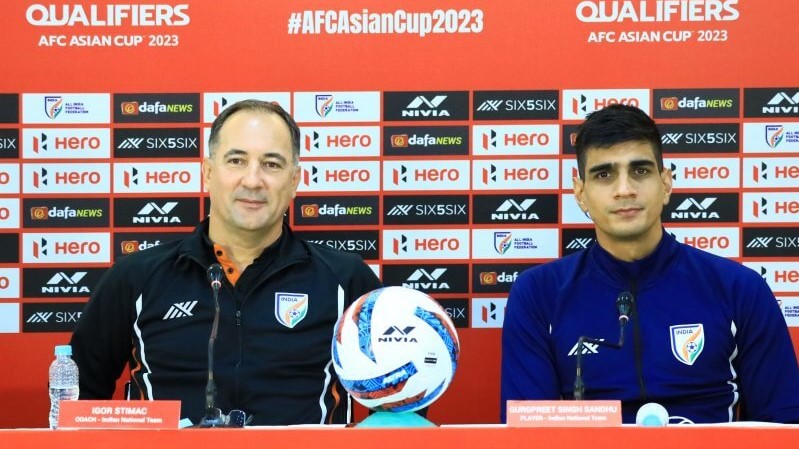 Blue Tigers Head Coach Igor Stimac warned that Afghanistan will be coming out with an attitude that will be quite in contrast to India’s last game against Cambodia.

Speaking at the official pre-match press conference, Stimac stated, “We need to stay disciplined, concentrated and be composed on the ball.”

“Afghanistan players are physically very strong. Positioning will be the key, and good reading of the game will be crucial. We need to keep tight lines, and win more duels. We need to be clever,” he stressed.

India play Afghanistan in their second match of the Asian Cup qualifiers at the VYBK on Saturday (June 11, 2022). The kick-off is at 8.30pm, and the match will be live on Star Sports Network, Hotstar, and Jio TV. Cambodia take on Hong Kong in the other match of the day at the same venue. As the situation stands, India and Hong Kong are on three points each from one match, while the others are yet to open their account.

“The last time we played Afghanistan in Doha we were better than them in each segment. Now we are in better shape than what we were last time around. I am very confident about the situation we are in, and my expectations are that we will win this game,” Stimac added.

His rival counterpart Anoush Dastgir, Head Coach, Afghanistan National Team, mentioned, “It’s a do or die for us tomorrow against India.”

“We need to learn from our mistakes. We have watched India and are preparing for them. Both teams know each other well. We expect a great game,” Anoush Dastgir commented. “Indian Football has been doing well in the last few years. The league structure here in India is very good.”

The Indian National Team goalkeeper Gurpreet Singh Sandhu described Afghanistan as “a tough side to play against.”

“They have players who play in Europe. It’s always nice to play against a team that fights. We need to win, and that’s why we are here,” Gurpreet Singh quipped. “I enjoy playing here. It’s special for me at the VYBK. The first time I played here was in the Kolkata derby. I have been lucky to experience a full house – so I am aware how it feels, and what it means to us as players.”

Referring to coach Stimac labelling him as one of the top 5 goalkeepers in Asia, Gurpreet thanked him for “such high praise.”

“It is very encouraging when the coach backs you like that. We are working as a team, and everyone is doing their job. I am not here because of my past performances. There is very high competition for this slot. In the last 45 days I have been working tirelessly trying to improve myself as a keeper,” Gurpreet maintained. “I try to do my job – reduce the mistakes, and be the one encouraging voice on the pitch. Confidence is key but hard work and showing up is also paramount.”

“The victory against Cambodia helped in regards to the confidence in the dressing room. We have started with the best possible way winning the first game. But the three points mean nothing if we aren’t able to get three points against Afghanistan – it’s as simple as that,” Stimac averred.

However, Stimac is yet to decide on his starting XI. “We still have another training in front of us and we need to see how people recover, and react. We need all fully fit players from this game. We will look at it after the morning screening on matchday, and decide. All options are open,” he informed.

Stimac also expressed that he “prefers the best possible option for every match.”

“I follow my instinct, and what I see on the training pitch. A fixed XI doesn’t exist in modern football. We need to select a team as per the opposition which we are playing – we need to adjust,” he felt.

Gurpreet pronounced: “The aim is to keep a clean sheet. That’s the price for any time – getting three goals, and not conceding any goal. We need to replicate that against Afghanistan.” Meanwhile, Afghanistan captain Farshad Noor added, “We will go out there and play to our strengths and hope for a good result. We are looking to win the game, and then we will focus on all calculations. We respect India as an opponent.”