MFA Corporate Elite League: 10-man MSP hold on for the first win of the campaign 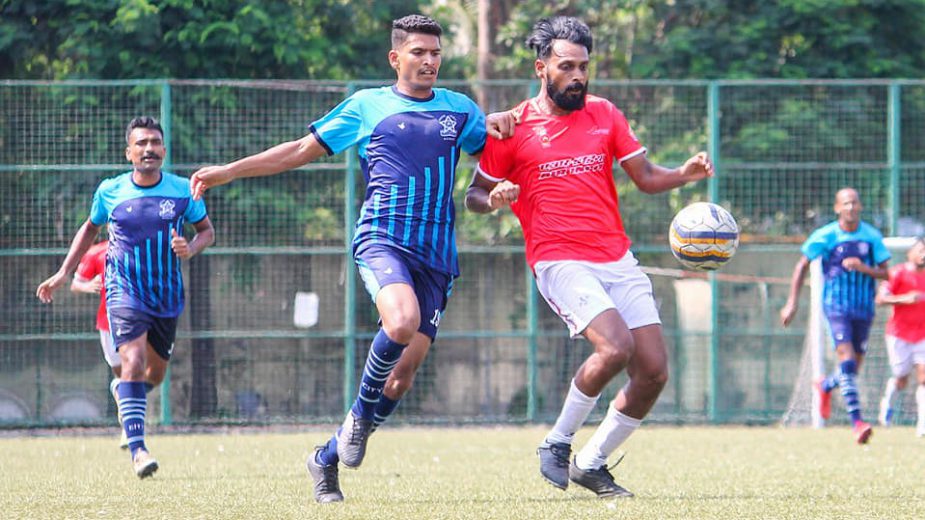 Air India’s late fight back with two injury-time goals went in vain as 10-man MSP held onto their lead in what turned out to be an exciting MFA Corporate League encounter.

In an inspiring performance, MSP shrugged off a brave late challenge from Air India to register their maiden victory of the MFA Corporate League campaign on Wednesday, 8 June 2022.

Air India started out brightly with Anup Nair attempting a long-range shot that just whisked past the post in the very first minute. The heavy pressure early on by Air India forced a foul off the MSP keeper just outside the box and going to the referee books. The resulting free-kick came off the wall. This was followed by another Air India attack that saw Sandesh putting Anup through on goal only for the latter’s strike to be straight to Keeper.

It wasn’t until the 25th minute when MSP took advantage of a Goalkeeping mistake to take the lead against the run of play. A long ball behind the Air India Defense looked to be in Keeper’s safe hands after a poor touch from the MSP striker only for the keeper to spill the ball that Himket took advantage of to strike home the opener.

With a goal down, Air India continued to attack while MSP looked to attack on the counter. In the 37th minute, one such counter proved to be decisive as MSP managed to double the lead. A long clearance was chased down hard by MSP’s no 11 Moin forcing the keeper to come off his line and head the ball away from outside the box. However, the clearance was just not good enough as fellow MSP striker Himket latched on to the mistake to head home his second of the day

At the other end, Siddhu Pawar had an opportunity to pull things back for Air India after finding himself in a one-on-one situation but the striker’s shot was parried away by the keeper.

At the closing stage of the first half, Anup sent in a low cross inside the MSP defense which Abhinav failed to tap in as Air India were left to rue their missed chances.

Early in the second half, Air India were given a lifeline when MSP defender Narender Katkar was shown the 2nd yellow card game for a reckless tackle as MSP went down to 10 men.

Thereafter Air India pushed men forward in search of goals but the MSP defense stood strong and continue to look for the opening through the counter.

In the dying minutes, Hikmet took advantage with a shot from outside the box in a counter-attack situation. The ball deflected off a player to nestle into the net as the striker completed his hattrick.

The goal seemed to have put the game into the bed however in the 2nd minute of injury time, Air India won a penalty that Sebastian converted to pull a goal back.

However, a minute later, a ball through the middle cut through MSP defense to find Asad Munshi who slotted it past the keeper into the net to make it 2-3.

However, the fight back came a bit too late as the referee soon blew the final whistle for full-time.

Also Read: The boys need to think about life after Sunil” – Igor Stimac

“The boys need to think about life after Sunil” – Igor Stimac
‘Happy, and confident’ India look ahead to game against Afghanistan