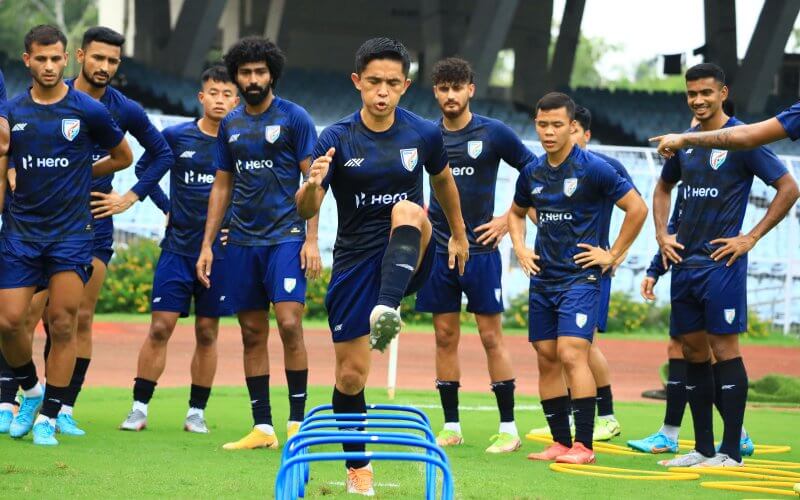 National Team skipper Sunil Chhetri says he always feels at home while in Kolkata.As the countdown for the AFC Asian Cup qualifiers begin, Sunil opens up about his fondest memories of Kolkata, the fans in the ‘City of Joy,’ India’s preparation, the current crop of Liston, Manvir, and others, and much more. EXCERPTS:

What memory does Kolkata bring to you?

A lot of fond memories — I started my career here. I got the taste of the Kolkata maidan here which is really special. I am married here and have an excellent family here. I am always at home in Kolkata.

I have always maintained that you may have played in every club and part of India, but if you haven’t got a taste of playing here in Kolkata, you are not complete as a player. The fans just love you here. Obviously, I have also been at the receiving end many times. I had my first brush of the Bengali language here at the Maidan – both in the form of love and abuses (laughs aloud).

The VYBK – that’s a stadium where you first played as a teenager some two decades back. Describe the feeling when you lead your country through the same player’s tunnel.

It is a surreal feeling, and the respect has been a mutual one. For the past few years, I have been playing against them for the club, but whenever I have worn the National team jersey, it’s always been genuine support, and that’s what I am expecting even this time. Football fans in Kolkata will never fail you.

What’s the mood in the camp? How confident are you about playing your 3rd Asian Cup?

That’s the ultimate goal. The mood is happy, and slowly and steadily everyone is getting fit — everyone is trying to understand each other. It’s quite a new team and a lot of places are up for grabs. There’s also a lot of new talent coming up. The good part is that everyone is hungry. We are hoping to get the right balance. Irrespective of who gets a chance, we will put our best foot forward.

Is it tricky that it’s only one match against all oppositions, rather than a usual double leg?

It’s a catch-22 situation. Simply because we have got home advantage, I’d say it would have been better if we got two games purely on the fact that we are playing at home. But it is what it is. It doesn’t matter now, and everyone has a fair chance. Playing at home comes with its own advantage, as much, as there will be pressure.

The personalities are different. Add to that the fitness and the manner the boys approach the game are also entirely different. The knowledge that the current batch has gained on and off the field makes it a very distinct difference.

Is Sunil Chhetri’s job nowadays easier with the likes of Liston, Brandon, Suresh, Manvir, Thapa, and all others with you?

I would say it’s more of a responsible job. I’d not want to categorise it as either easy or hard. Sometimes I get into this vicious circle of thinking about it, and it affects my game in a manner I don’t like. So, I prefer to stay away from it. I try to keep my job simpler because I can do as much as I can do. The best feeling is when I go out and give whatever I have.