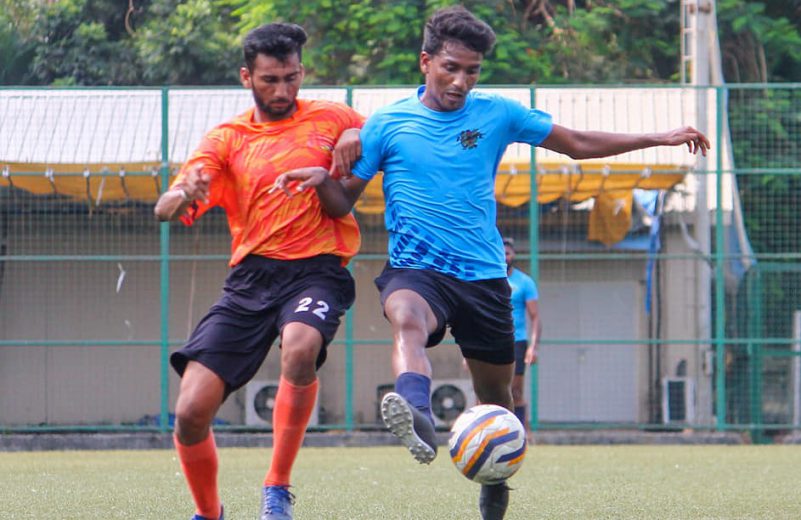 In the top of the table clash, Bank of Baroda beat Income tax to take pole position in the League table while in another game, Customs rally late to hold Bank of India to a 2-2 draw.

Needing a win to overtake Income tax in the league’s pole position, Bank of Baroda produced a clinical performance to outclass Income tax 3-0 in Thursday’s top-of-the-table clash. With this win Bank of Baroda are now on the same points with Income tax but manage to take the 1st position courtesy of better goal difference.

The match began with Bank of Baroda taking the attacking route early on. The early pressure paid off when in the 15th minute, Shaunak Gorphede brought down Denzil inside the box. The Bank of Baroda striker then stepped up for the spot-kick striking it past the diving keeper to make it 1-0.

Income tax tried to make a comeback with a couple of chances of their own but failed to break the Bank of Baroda defense as the latter entered the break with a 1-0 lead. In the second half, Bank of Baroda started out brightly again and managed to double the lead in the 65th minute when Mohammed Khatib’s cut back inside the box was slotted home by Hardik Bhatt to make it 2-0.

Income Tax suffered a big setback when Troy D’souza got himself a second booking of the game for a rash tackle from behind. Income Tax continued to attack but their profligacy in the attack meant goals were hard to come by.

In the 2nd minute of Injury time, Mohammed Khatib overcame his marker to shoot past the keeper to put the game to bed.

In another game, a late fight back from Customs ensured two goals in the last five minutes that rescued them a point to take home against Bank of India who had taken a 2-0 lead.

Bank Of India scored the opening goal in the 36th minute when Custom missed a one-on-one opportunity allowing BOI to counter ended with Parag Dhanur finding the back of the net to make it 1-0 for Bankers.

In the second half, around the hour mark, Bank of India managed to double the lead when Stiener D’souza’s shot beat the keeper to find the back of the net to make it 2-0.

With the game slipping away, Customs responded with a flurry of attacks but were kept away by a BOI defense until the final five minutes of the game. Dhaval Waghela managed to pull one back for the defending champions in the 86th minute to make it 2-1.

Customs continued to attack and in the 90th minute, Veteran defender Hekmat Singh stuck a shot that beat the keeper to find the back of net to complete an incredible comeback.