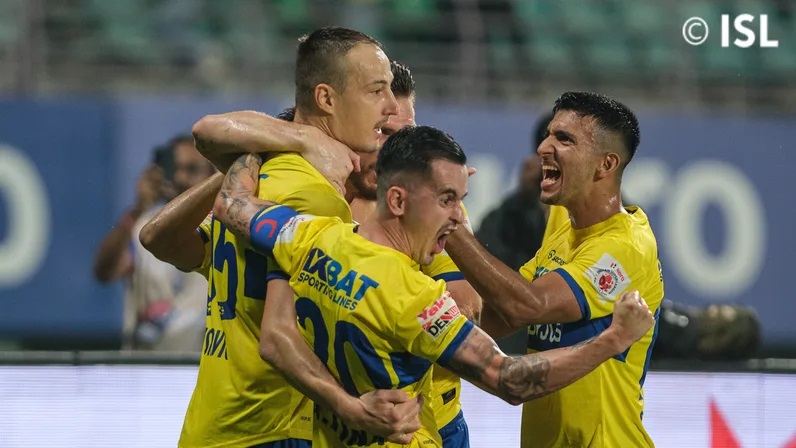 Kerala Blasters FC reached a new landmark after notching their fifth successive win in the Hero Indian Super League (ISL), an exhilarating 3-2 result against Bengaluru FC at the Jawaharlal Nehru Stadium in Kochi on Sunday.

Marko Leskovic, Dimitrios Diamantakos, and substitute Apostolos Giannou were on target for the Blasters. Sunil Chhetri got off the mark this season for the Blues, and Javi Hernandez scored his third goal of the season but Bengaluru FC fell to their sixth defeat of the season.

Both teams came in unchanged, and it was the visitors who drew first blood after just 14 minutes when skipper Sunil Chhetri pounced on a long ball from defence and tried to take it away from Blasters goalkeeper Prabhsukhan Gill. As they came together, Chhetri fell to ground and the referee pointed to the spot. Chhetri got off the mark this season as he sent Gill the wrong way and put the Blues in front.

Eleven minutes later, the hosts restored parity. Sandesh Jhingan took Diamantakos out near the edge of the box with a tackle. Adrian Luna struck the upright from the resulting free kick and the ball cannoned off to the right flank. From there, Sandeep Singh whipped in a cross, and Marko Leskovic managed to keep his composure in a crowded box to level the score.

The comeback was complete two minutes before the break. Luna, who was menacing in the final third throughout the half, played an inch-perfect low cross from the left flank into the box, where Diamantakos got ahead of Aleksandar Jovanovic and got on the scoresheet in his fifth successive game.

In the 70th minute, substitute Giannou established a two-goal cushion for the Blasters. Approaching the Bengaluru FC penalty area, Diamantakos played a through pass to Giannou before the 32-year-old striker took it away from Sandhu and squeezed it in from a tight angle with his first contribution after coming on.

The Blues were not down and out as they pulled one back in the 81st minute courtesy of Hernandez. Blasters defender Ruivah Hormipam’s looping header landed straight at the feet of Hernandez, who unleashed a fierce volley from the edge of the box that flashed past the keeper to cut the deficit back down to one. But that was to be Bengaluru FC’s last offence.

The win takes Kerala Blasters from sixth to fourth in the table, just a point behind ATK Mohun Bagan in third place. The Blasters will travel to face Chennaiyin FC at the Marina Arena on December 19. Bengaluru FC remain in ninth place with seven points. The Blues will host Jamshedpur FC on December 17.