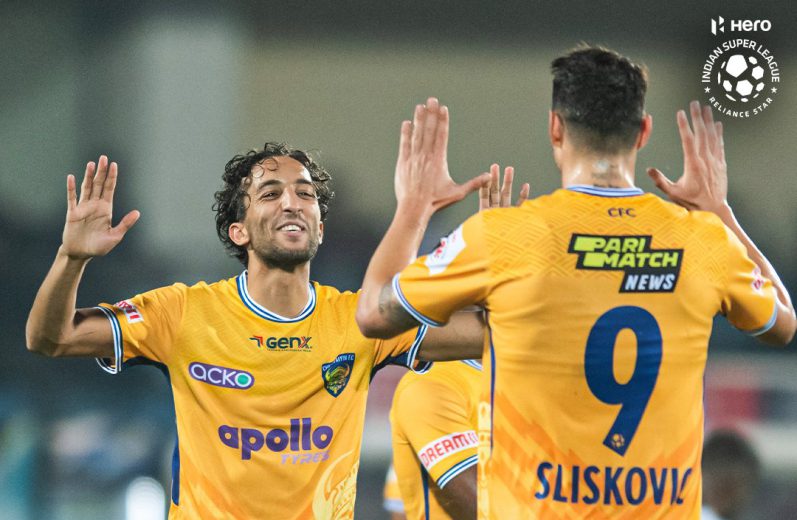 Chennaiyin FC put in a breathtaking performance on the road in a ten-goal torrent, coming out as 7-3 victors over NorthEast United FC at the Indira Gandhi Athletic Stadium in Guwahati on Saturday.

Midfielder Abdenasser El Khayati pulled all the strings for the Marina Machans, bagging a hat-trick and two assists, to set a new Hero ISL record for most goal contributions in a match.

El Khayati opened the scoring in the game, putting his team 1-0 up in the 11th minute before the Highlanders equalized, and then sealed his hat-trick with goals on either side of the half-time whistle.

Petar Sliskovic also had a fine game up front for Chennaiyin FC with a brace, with one of his goals set up by El Khayati. Julius Duker was the other beneficiary of El Khayati’s stellar show, bagging a 68th-minute goal to wrap up a near-perfect attacking performance. Joe Zoherliana (79’) had a night to forget, guiding the ball into his own net to give Chennaiyin FC their seventh goal of the evening.

New NorthEast United FC head coach Vincenzo Annese was taking charge of his team for the first time following the departure of Marco Balbul. It was a difficult start to his time in charge, but there were some positives to take back from the game. Wilmar Gil Jordan was on target for NorthEast United FC from the penalty spot and Romain Philippoteaux smashed in a great volley in the second half. Rochharzela added another goal for the Highlanders five minutes into stoppage time. But ultimately, all of it came much too late.

Their early momentum was disrupted by El Khayati, who got on the end of an excellent cut-back from Prasanth K from the right flank. Khayati’s guided volley effort set the tone for his performance.

El Khayati, Sliskovic, and Rahim Ali were a constant threat with El Khayati getting his second four minutes after Jordan’s equalizer, and Sliskovic getting his first just before half-time. El Khayati’s second was a brilliant bending effort. Sliskovic’s brace included two headers, with his first coming from an excellent near-post run. Chennaiyin FC were heading into the second half with a 3-1 lead.

Whatever resolve NorthEast United FC had earlier in the game was lost quite early in the second with El Khayati completing his hat-trick three minutes into the second-half with a driven effort from range. Sliskovic made it 5-1 for Chennaiyin FC in the 57th minute with another thumping header. Julius Duker joined the party 11 minutes later to put Chennaiyin FC 6-1 ahead. The next three goals in the game all came from NorthEast United FC, two in their favor and one in Chennaiyin’s.

The win keeps Chennaiyin FC in seventh place, but with a big boost to their goal difference which is now closer to being in the positive. They host Kerala Blasters next on December 19. NorthEast United continue at the bottom of the table with no points from nine games. They travel to play FC Goa next on December 17.