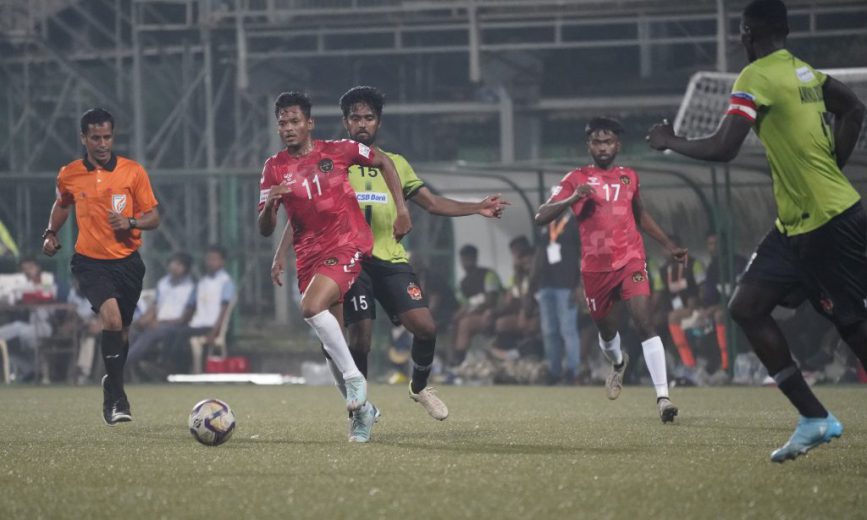 Mumbai Kenkre FC drew 1-1 with Gokulam Kerala FC in the fifth-round fixture of the Hero I-League at the Cooperage Stadium in Mumbai on Sunday, December 4, 2022.

An early first-half tap-in goal by Lalhmangaihsanga Ralte was cancelled out by a second-half strike from Shijin Thadhayouse as the hosts held the two-time champions to a draw.

Kenkre FC had a dream start as they shot into the lead just three minutes into the game. In an attempt to block a cross from Al Azhar Delhiwala, Gokulam’s Rahul Raju handled the ball giving a free kick to Kenkre. The Gokulam defence failed to clear Azfar Noorani’s free-kick, which found its way to Lalhmangaihsanga Ralte in the six-yard box, who tapped into an open goal.

Building from the back, the defending champions slowly grew into the game. Midway through the first half, Gokulam started putting pressure on the home defence. However, Kenkre, who adapted to a counter-attacking game, remained effective in their strategy.

In the 24th minute, Mumbai Kenkre caught the visitors on the counter. Aravindraj Rajan won the ball in the midfield and fed it to Aman Gaikwad on the right wing. Gaikwad crossed the ball back to Rajan, who continued his run into the box. With only the goalkeeper Shibinraj Kunniyil to beat, Rajan took a low shot, which was saved by Kunniyil.

On the other end, Gokulam striker Auguste Somlaga found himself on the edge of the penalty area but his shot went wide. Ten minutes from halftime, Gokulam almost equalised. Farshad Noor took a left-footed shot from the edge of the box aiming for the bottom corner but it was tipped away for a corner by the Kenkre custodian Tenzin Samdup. Gokulam received back-to-back set pieces but couldn’t make any use of them.

Gokulam Kerala’s Cameroonian head coach Richard Towa made three changes at half-time. One of the substitutes, Arjun Jayaraj, nearly equalised for the visitors two minutes into the second half. Fellow substitute Noufal PN passed the ball into Jayaraj’s way inside the box, who unleashed a powerful shot but it was just over the bar.

Jayaraj was again in the thick of things as he crossed the ball into the box and after a series of blocked shots and missed clearances, the ball fell for Shijin Thadhayouse, who equalised for the Malabarians in the 54th minute as Kenkre goalkeeper Samdup failed to stop a rather weak effort.

Kenkre’s Aman Gaikwad continued to display his pace and skills. At the hour mark, the 21-year-old winger put a teasing ball in for Raju in the box, but the striker couldn’t connect his header. Nine minutes later, Kynsailang Khongsit played a quick one-to-one with Raju and as the fullback took a shot on goal but it was saved by Kunniyil.

Gokulam Kerala are now fifth in the league table with eight points from five games, while Mumbai Kenkre now have five points from as many matches and sit in ninth place.

Petratos magic sinks Bengaluru FC to another goalless defeat of the season
Japan’s efforts are paying off and with RFYC, we are moving in the right direction – Former India footballer Izumi Arata