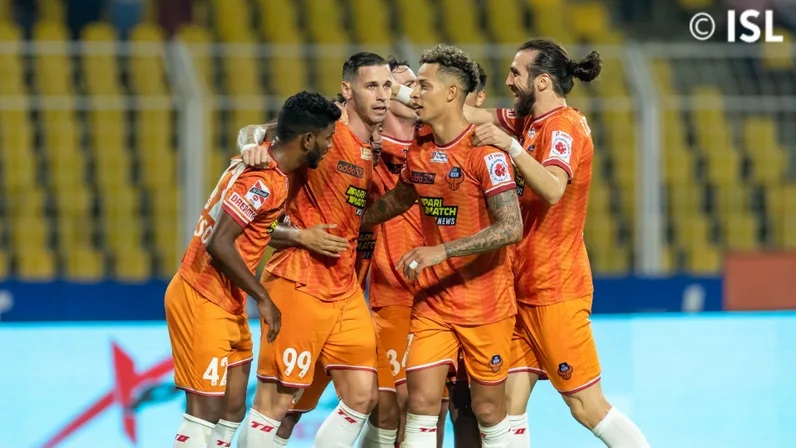 FC Goa broke their losing streak and put an end to Odisha FC’s winning after a comfortable 3-0 win in the Hero Indian Super League (ISL) at the Jawaharlal Nehru Stadium in Goa on Saturday.

Substitute Brison Fernandes broke the deadlock with his first touch in the 74th minute before Noah Sadaoui and Alvaro Vazquez wrapped up the three points for the Gaurs. The Juggernauts were reduced to ten men in the 65th minute when Nandhakumar Sekar was shown a second yellow, and FC Goa made the visitors pay with all three goals coming after.

FC Goa made three changes. Glan Martins came in to replace the suspended Edu Bedia in midfield. Fares Arnaout started in defence, and the Gaurs’ top-scorer Sadaoui started up front, with Marc Hernandez and Vazquez dropping to the bench. Odisha FC made a couple of changes. Lalruatthara slotted into the left-back position, replacing the injured Sahil Panwar. Up top, Pedro Martin started, and Diego Mauricio dropped to the bench.

The visitors kept more of the ball during the first half and had more chances to score. The first came six minutes into the game when Osama Malik dinked the ball across the face of goal before Martin missed it whilst attempting the spectacular. The ball was eventually volleyed at goal by Narender Gahlot and beaten off the line by Anwar Ali.

Six minutes from the break, the ball was cleared off the line again. This time it was Ayush Chhetri who came to FC Goa’s rescue. Dheeraj Singh missed the ball from an inswinging corner completely as Saul Crespo’s goal-bound header was kneed onto the upright by Chhetri.

At the other end, against the run of play, Brandon Fernandes put Iker Guarrotxena through on goal. However, Carlos Delgado’s tackle allowed Amrinder Singh to sprint forward and parry it away from the Spaniard. But the ball was parried straight to Sadaoui, who failed to get the ball into an empty goal from near the edge of the box in the 42nd minute.

Five minutes past the hour mark, The Juggernauts were reduced to ten men after a challenge by Nandhakumar Sekar on Princeton Rebello saw him receive a second yellow.

In the 74th minute, Seriton Fernandes played a through ball down the right flank, and Sadaoui pounced on it before pulling it back for substitute Brison. With his first touch, Brison smashed the ball in at the near post to give his side the lead.

Four minutes later, FC Goa doubled their lead courtesy of Sadaoui. Seriton played another sublime cross towards Vazquez, whose effort came off the crossbar. Amrinder punched the rebound only as far as Sadaoui, who finished powerfully. In the final minute, Sadaoui slid Vazquez through on goal, and the striker put the game to bed.

The win took FC Goa from sixth to fifth, just three points behind their opponents. The Gaurs will remain at Fatorda for the next game against NorthEast United FC on December 17, Saturday. The Juggernauts stay fourth on the table and will return to Bhubaneswar to host ATK Mohun Bagan on December 15, Thursday.