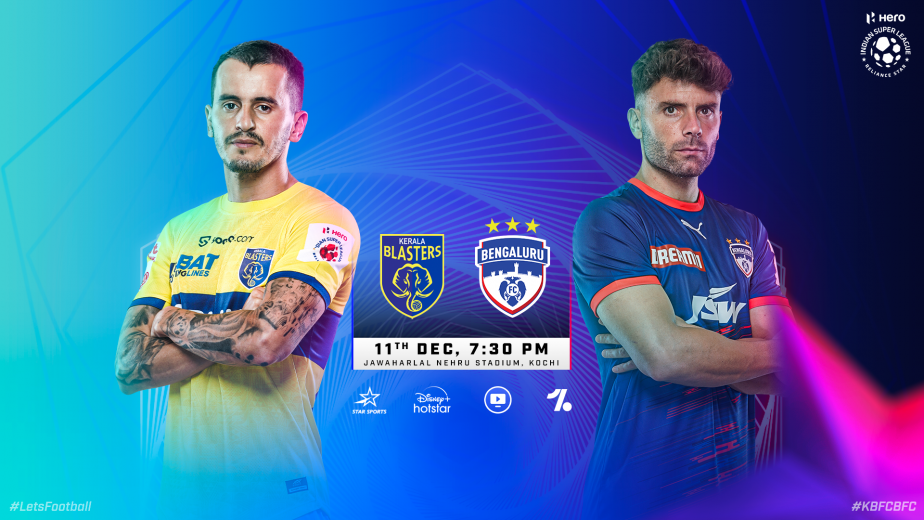 Rivals Kerala Blasters and Bengaluru FC are set to collide for the first time this season in the Hero Indian Super League (ISL) at the Jawaharlal Nehru Stadium in Kochi on Sunday.

It will be a clash of contrasting teams, as the Blasters have won four of their last five Hero ISL games, while the Blues have lost five of their last six.

Kerala Blasters’ recent run has seen them earn four wins on the bounce for the first time in Hero ISL history. The Blasters have kept clean sheets in three out of the last four games, scoring eight goals and conceding just one in the process.

Last week, a solitary Dimitrios Diamantakos goal in the 17th minute was enough for Kerala Blasters FC to snatch all available points in Jamshedpur. The Greek striker became the joint-top-scorer for the club this season with Kaliuzhnyi. Both players have now scored four goals each in eight games.

“We know this is a very important game for people in Kerala. We as a team like to play this kind of game”, said Vukomanovic, ahead of the match. “When you have the mind of a football player, you want to compete and prefer to play games like this every weekend. We are looking forward to an interesting game tomorrow. May the better team win,” he added.

Bengaluru FC ended their winless streak two weeks ago but fell to another defeat last week at home against ATK Mohun Bagan. After eight games, Bengaluru FC have scored just four goals, which is the joint-fewest this season with NorthEast United FC. The Blues will be hoping to turn things around with new signing Pablo Perez. The Spanish attacking midfielder has been brought into the club to boost the strength of the midfield and attack.

Head coach Simon Grayson has room for a foreign player in his lineup, with the option of benching a midfielder to deploy the Spanish duo of Javi Hernandez and Perez in the centre of the park. After bagging a brace against FC Goa two weeks ago, Hernandez is the club’s top scorer this season.

Grayson provided an update on the new signing. “He has done a lot of physical work in terms of conditioning but has not done much football work in the past two to three months. I have got to decide if he will feature this weekend or not because he has only been with us for three sessions. The last thing I want to do is rush him,” said Grayson.

The history books favour the visitors as the Blues have won six of the ten Hero ISL encounters played between these two sides. The Blasters have only won twice, while two games have ended in draws