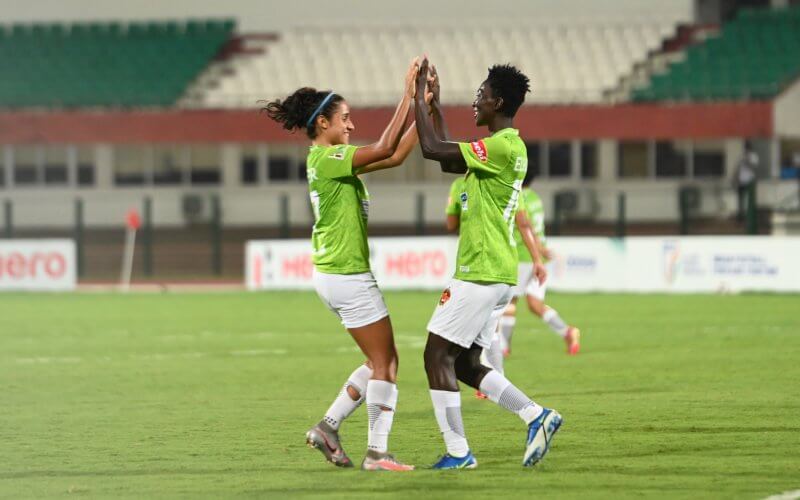 Gokulam Kerala snatched yet another landslide victory in the Hero Indian Women’s League 2022, as they defeated ARA FC 8-0 at the Kalinga Stadium on Thursday, May 5. The win takes them back to the top of the points table.

Gokulam’s Ghanaian forward Elshaddai Acheampong netted a hat-trick after coming off the bench, to bag the Hero of the Match award.

Manisha Kalyan opened the scoring for the defending champions in the 5th minute, netting an easy tap-in to make it 1-0. The side looked dominant right from the start and enjoyed the majority of possession in the opening minutes.

At the half hour mark, Dangmei Grace capitalised on an error made by ARA FC defenders while clearing their lines and beat the keeper from close range to make it 2-0.

After switching sides, there was no stopping Gokulam Kerala. The team went on a goalscoring spree with Soumya Guguloth marking the beginning of it in the 49th minute via a towering header. Before being substituted off, Myanmar international Win Tun made it 4-0, after the ARA FC defence failed to clear steer of the ball again.

In the 70th minute, substitute Elshaddai Acheampong scored off a brilliant header after Dalima Chhibber provided her with a perfectly-lobbed ball inside the box. With the score 5-0, Gokulam Kerala had sealed the three points. However, the Malabarians looked relentless and went on to score their sixth in the 79th minute. Elshaddai was behind the ball once again as she converted from inside the box to score her seventh of the Hero IWL campaign.

Three minutes later, another substitute Jyoti also got onto the scoresheet as she fired a shot into the top right corner from the left side of the box. To add a final nail in the coffin for ARA FC, Elshaddai netted in the third minute of added time making it 8-0. The Ghanaian forward met Jyoti’s tantalising cross and scored with her first touch to complete her hat-trick.