“No matter what happens this season, we’re happy to be back in the stands”, Bengaluru FC fans on returning to the stadium after two years 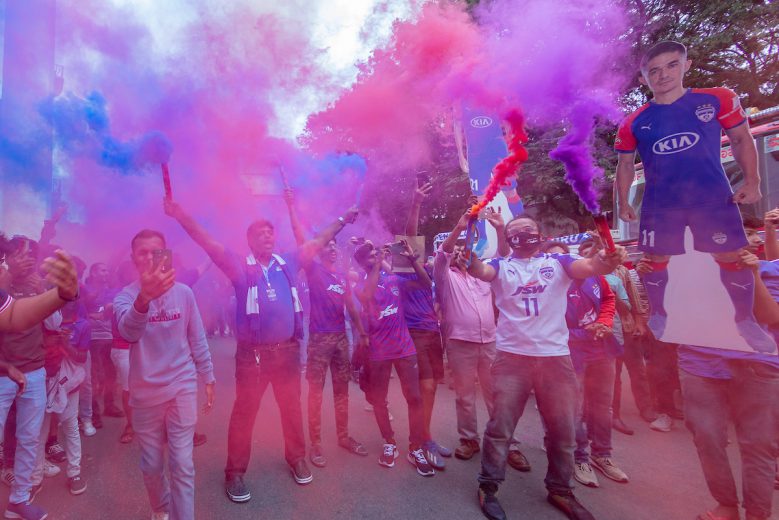 After being played behind closed doors for two years, the Hero Indian Super League (ISL) has welcomed fans back into the stands this season.

The reception for teams across the various cities has been loud and passionate, embodying the spirit of the Hero Indian Super League and adding to the experience.

One of the contingents who had missed out on the stadium experience over the last two years were the West Block Blues, Bengaluru FC’s fan club. While the team have picked up only one point from their last four games following up the Durand Cup title with a shaky start, their passionate fans are not giving up.

“Coming back after two years was special and a festive atmosphere engulfed the stadium as we won that game,” said Rakesh Haridas, a member of the West Block Blues. “It is everything. Ask any football fan and they will give you the same answer – it is everything to see your team play live. That’s what we live for. It is incomparable. No matter what happens this season, we’re happy to be back in the stands and supporting our team. The rest is secondary, and it doesn’t matter.”

The West Block Blues are among the most vociferous fan groups in the country and have turned out in numbers during both of Bengaluru FC’s home games so far this season. In the latest game, against East Bengal FC, Bengaluru FC fell to their third straight defeat of the season and only their fifth ever at home. The supporters in the stadium didn’t quieten down till the final whistle, which has long been a feature of the Hero ISL. After the match, Sunil Chhetri tweeted out an apology to the fans and asked them to keep the faith, and the fans are showing no signs of losing it.

“No matter what happens, whether we win or lose, we stand with our team. That is the West Block Blues’ philosophy. It is just to be loud for 90 minutes without worrying about what is happening,” said Haridas. “We have always told him [Sunil Chhetri] and the team that our support for them is absolute. That does not change. It was a frustrating loss last time around, but it is what it is. It could have gone either way.”

In an effort to bring more passionate supporters to the stadiums, the Hero ISL has introduced a weekend-friendly format this season and Haridas said it has helped to keep the stands full during the new season.

“The weekend games are always better. It doesn’t clash with other leagues and family time. We are encouraging people to have family time at the stadium. Once you show anyone live football, there’s no going back. Everyone who has come to the stadium knows this,” Haridas said. “The football craze exists in all cities and the weekend fixtures will help the fan base grow in all these cities. No team wants to play in an empty stadium. As long as the stadiums are full, everyone will be happy,” he added.

Bengaluru FC are currently ninth on the table, with four points from five games. They travel to Mumbai on Thursday, November 17, their next game, and a group of supporters are expected to travel in parallel.