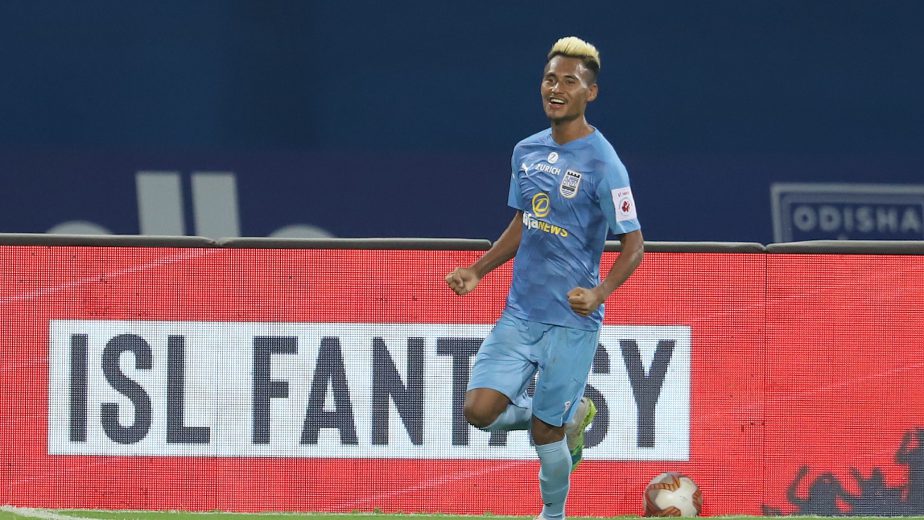 Ever since Bipin Singh stepped into Mumbai colours, he has gone from strength to strength from winning the ISL title with the club to making his debut for the national team.

It’s been five years since Bipin signed for Mumbai City FC and over the years has given some memorable moments for the fans, from scoring his first-ever career hat-trick in the 2019-20 season to scoring a dream match-winning goal in the 2021 Indian Super League final against ATK Mohun Bagan, Bipin Singh has become a key player for the club.

In an exclusive interview with Footballcounter, Bipin Singh spoke about how Mumbai has become a second home for him now, his favorite moment with the club, competition within the team and more

“Abhi tho ghar jaise hogaya hai (It’s like a home now)” remarks Bipin smilingly, “Everyone from the staff, management and teammates have become like a family to me.” Speaking about his camaraderie within the team, Bipin singled out goalkeepers Mohammed Nawaz and Bhaskar Roy as his best mates. ”I have been here for five years now, and everyone is my friends here. I have a great rapport with Nawaz who is also from Manipur like me. Bhaskar Roy who came here this season is also a great friend of mine. So we are like brothers now.”

Speaking about his fellow teammate L Chhangte, ”Chhangte and me discuss football together during team meetings, and we do gym together and even in fun games after a workout, Chhangte, me, Vinit we all play together.”

Competition is a good thing

Mumbai has one of the most attacking lineups in the league, alongside Bipin, the likes of Greg Stewart, Jorge Pereyra Diaz, L. Chhangte, and with youngsters like Vikram Pratap Singh and Gurkirat Singh on the bench, make the Islanders a deadly force. Speaking about the competition within the team, Bipin stated, “It’s a good thing, there should be competitiveness within the team, helps you push harder and not take things lightly.”

Further adding, “Every player has to give his best in the training to prove his place in the team. This competition helps us to give our 100%, everybody knows the spot in the team is not to be taken for granted. We know we have to work and look for improvement all the time.”

Jorge Costa made me a fighter, Lobera gave me starts and Des motivates me to do more

In the five years of his career at Mumbai City FC, Bipin has played under three different Coaches – Jorge Costa, Sergio Lobera, and now Des Buckingham. When asked about who he loved working with, Bipin credited all three refusing to pick someone as his favorite, “All three coaches had a different way of working. My aim was to deliver what they expected from me on the field. But they played an important role in my career.”

Further elaborating on it. “Jorge Costa made me a fighter and to be a bit aggressive. Earlier I wasn’t that aggressive or a fighter but he changed that. Then Lobera came and he expected us to play in a certain way and I became a regular in the line-up during his time.”

Speaking about his current coach Des Buckingham, “He is a very positive coach, He always has a positive thing to say to us, always motivates me, and expects me to do more”

When asked about important career advice that he received in his life, Bipin credited the senior players in Manipur “Early in my career when I was not getting much playing chances, when I went home in Manipur the senior players there would advise me to not lose hope and keep working hard. They would say to me to work on improving my game and when the boss gives me a chance I would take it.” Said Bipin

It feels nice when fans have a special chant for me

Speaking about the love received from the fans, Bipin adds, “It feels nice that the Mumbai fans have a special chant for me, they are a great set of fans, I always get messages from them, wishing me well for the games, asking me to score goals and win games for them”

It has been a positive start for the Islanders so far with two wins and two draws with Bipin scoring a goal already this season so far. The goal meant Bipin beat Modou Sougou’s 15-goal tally for Mumbai to become the club’s all-time leading goal scorer. When asked about his favorite goal for the club, he singled out his title-winning goal as the best one. “When it comes to picking up my favorite goal there is only one right now, the 90th-minute winner, I scored against the ATK Mohun Bagan team to help lift the title for my club.

Speaking about his season goals, Bipin mentioned his target to score more goals than last season, “Last season, I scored 6 goals, and in the season before I had scored 6 goals too. I had a few assists also in these seasons. My current aim is to increase the tally, score more than 6 goals for the club and win more matches”