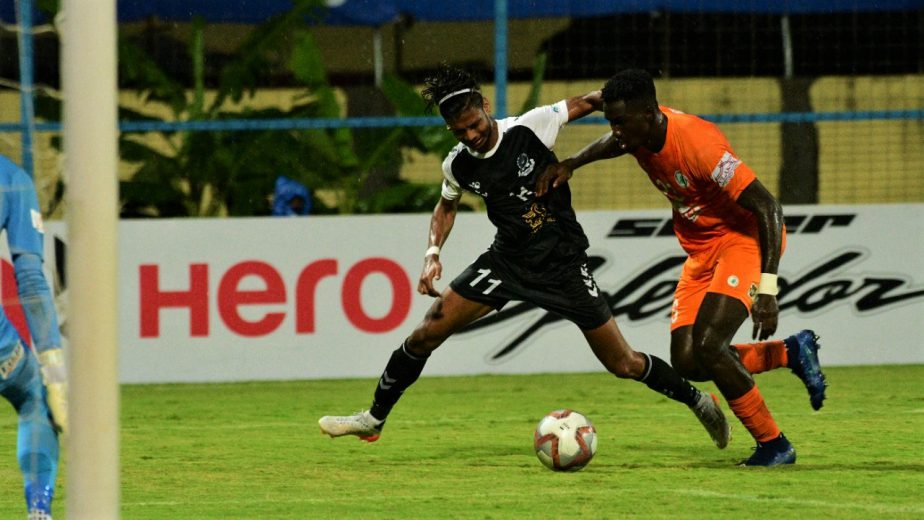 A convincing victory and a first clean sheet after eight games for Mohammedan SC helped them overcome NEROCA FC on a rainy evening, here at the Naihati Stadium. Both goals were gifts from the NEROCA defence as Marcus Joseph was on the scoresheet again alongside Henry Kisekka, who scored five minutes after coming on to make his first appearance for the club.

Emerging with just one win in the last five games and Gokulam Kerala continuing their good run at the top, a good start in this game was a compulsion for Mohammedan. The rain played its part on the pitch as both sides were testing the waters in the opening ten minutes of the game.

Mohammedan got the start they wanted as Marcus Joseph pounced on a complacent back-pass and carefully placed it into the back of the net to give his side the lead in the 17th minute. The Trinidadian attacking instinct has been evident all season and was evident yet again as he nabbed his 13th goal of the season, with an eye on the golden boot.

After conceding in an unfortunate manner, NEROCA pushed forward looking for a desperate equaliser. The attacking four of NEROCA were kept at bay by the Mohammedan back-five. Khaiminthang Lhungdim got into the box from the left but a dual tackle from Wayne Vaz and Saiful Rahaman denied a shot on target.

In the second half, Mohammedan came out all guns blazing, exuding confidence in attack, pushing NEROCA into their own half. Faiaz came close to scoring Mohammedan’s second of the evening but was denied by Nash at the end. Joseph and Faisal Ali played a nice one-two down the right before Joseph blasted his shot just wide of the goal.

A minute later, Brandon Vanlalremdika crossed in a beautiful ball from the left which came directly to Ali who could not keep his free header on target. Joseph was in on the act again as he found himself in a one-on-one situation with the goalkeeper. However, this time it was Prateek Singh who came out on top with a brave block to deny the Trinidadian.

Four minutes past the hour mark, NEROCA had an opportunity to whip the ball into the Mohammedan box from a freekick. Davis Kamanga lofted the ball in but it could not do any damage. Instead, it gave Mohammedan a chance to break on the counter. Brandon sneaked into the box from the left, under pressure from Sitlhou, and got a tame shot away that was comfortably saved by the keeper.

NEROCA had Ben Nash to thank for his astute defending that kept them in the game. Ali was in on goal but could not get a shot away as Nash thwarted the Winger’s run from the right. Nash’s tackles, blocks and pressurising tactics ended quite a few Mohammedan attacks.

At the other end, the defensive pair of Wayne Vaz and Asheer Akhtar was booked for a double-challenge on Kamanga. From the resulting freekick, Mendi’s curling effort was inches away from goal.

Three minutes from time, Andrey Chernyshov decided to make a defensive change as Andelo Rudovic was replaced by Sujit Sadhu. The change came a couple of minutes after Faiaz was replaced by Henry Kisekka, who had come on to make his first appearance of the season.

In the first minute of additional time, Joseph was gifted with yet another opportunity. However, this time the unselfish striker passed it to Kisekka, who took a touch before tapping the ball into an empty net. Kisekka scored a goal five minutes into his first appearance to give Mohammedan a two-goal lead that was held till the full-time whistle.

The win keeps Mohammedan in the title race and within three points of Gokulam Kerala. The leaders do have a game in hand. NEROCA, who have extended their winless streak to six games, moved to the bottom of the table, level on points with Rajasthan United.