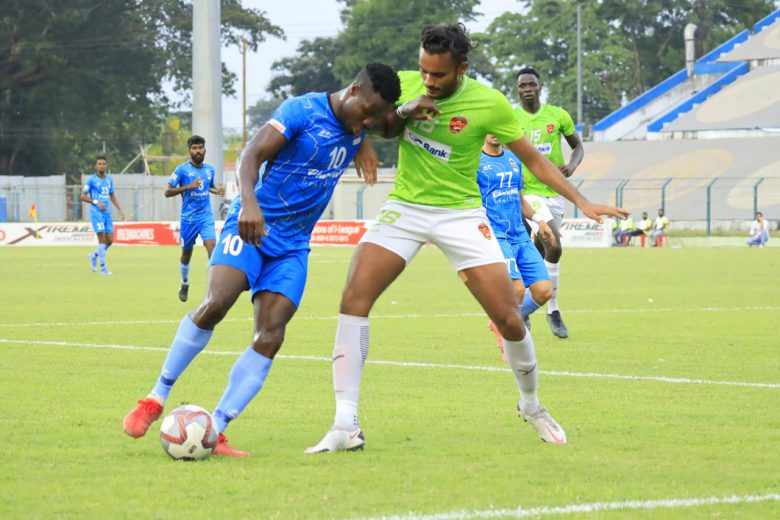 Gokulam Kerala came from behind on Saturday to hold Churchill Brothers FC Goa for a 1-1 stalemate in the Hero I-League, here, at the Kalyani Stadium. Ikechukwu Kenneth Ngwoke broke the deadlock by scoring the opener in the 15th minute. However, his goal was cancelled out by Jourdain Fletcher. Gokulam Kerala dominated the game in terms of ball possessions (69%) and shots on target (13) but they were forced to settle for a draw in the end.

The league leaders Gokulam Kerala FC started the game on the front foot, pressing relentlessly in the hopes of breaking the deadlock early. They also had back-to-back chances inside 10 minutes, but they were unable to convert them. In the meantime, Churchill Brothers FC Goa relied on their defence to prevent their opponents from scoring an early goal.

After securing the backline, Churchill Brothers started their counter-attack, and they were soon rewarded when Nigerian forward Kenneth Ngwoke tricked the opposing goalkeeper Akshit Dagar to put his team ahead in the 15th minute. Richard Costa set him up with a looping cross, and the 29-year-old made no mistakes as he slammed the ball into the net.

After surrendering the opening goal, Gokulam Kerala raised their game in pursuit of an equaliser. Churchill Brothers, on the other hand, kept their cool and did not allow their opponents to level the game. Churchill Brothers’ defence was compact, despite Gokulam’s constant attacks down the channels.  Churchill’s fullbacks didn’t leave much room for the reigning champions around the 18-yard box to create clear-cut opportunities.

Jithin MS received the first yellow card of the match in the 36th minute for a harsh foul as a result of Gokulam Kerala’s persistent attack. However, they were also successful in levelling the contest as Jourdain Ronaldo Fletcher pulled one back for his side in the 38th minute. Mohammed Jasim dashed down the line, outrunning a couple of Churchill defenders before passing to Fletcher in the box, who slammed the ball into the net.

Following that, both teams increased their intensity in an attempt to grab the lead by scoring their second goal, but they were unsuccessful in their attempts as the game was locked at 1-1 at the end of the first half.

Both Gokulam Kerala and Churchill Brothers started the second half cautiously as they aimed to gain the upper hand in the match. Gokulam Kerala named double substitutions at the start of the second half as Sreekuttan VS and Zodingliana replaced Ahmed Waseem Razeek and Jithin on the field respectively. Zodingliana was booked for a challenge on one of his opponents just two minutes after taking the field.

As the game approached the one-hour mark, the Malabarians increased their efforts in their pursuit of a goal. Churchill, on the other hand, maintained a tight grip on his competitors.

Thahir Zaman was replaced by Beneston Barretto in the 62nd minute as Gokulam Kerala made another round of substitutions. In the 68th minute, Krizo was cautioned, becoming the first Churchill Brothers player to get penalized. Shubert Pereira replaced Krizo five minutes after he was punished.

Emil Benny was substituted in the 75th minute to make way for Abhijith K, and three minutes later he produced a wonderful opportunity for Gokulam Kerala by taking a shot from close range, but it did not go in.

The defending champions continued their persistent attack as the game neared the end with the hope to score the winning goal. However, the Red machines maintained their composure to hold out for a draw.