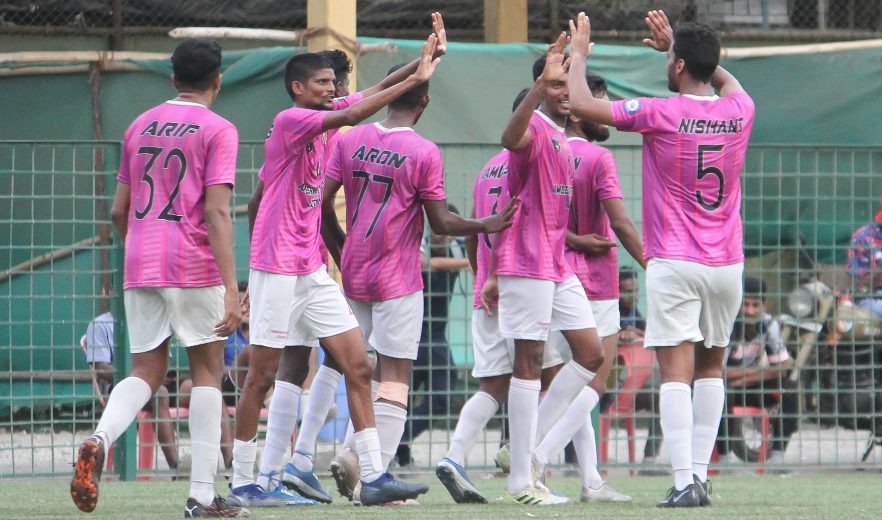 From the first whistle of the game, Ambernath United Atlanta FC had good possession of the ball and went on in attack. Millat FC remained strong at the back and repulsed AUA FC’s attacks. The league leaders gave their all but could not break the deadlock as the first half ended goalless.

The Steven Dias managed side entered the pitch with a lot of determination in the second half. Moments after the resumption, Ambernath United Atlanta FC scored the opening goal of the game. From the right flank, Aaron D’Costa put a fine cross and found Arif Shaikh who passed it to Allen Dias. Allen gave it back to Arif who took a shot and gave his side the lead.

Ambernath United Atlanta FC doubled the lead in the 55th minute courtesy of Kamlesh Nadar. AUA FC won a corner kick, Aaron D’Costa stepped up to take it and played a short pass to Shravan Shetty who put a cross into the box. Kamlesh, in a tight space at the first post, beat everyone and headed the ball home to make it 2-0.

10 minutes later, Ambernath United Atlanta FC tripled their lead. Allen Dias was able to beat the Millat FC defense with a nice through ball. Alister Anthony made a darting run and collected the ball in the final third. He then beat the opposition goalkeeper and slotted the ball home to seal the victory for his side.

Millat FC tried hard to fight back but could not score as the game ended with another win for the table toppers. With this win, AUA FC has won 14 games and is just one step away from becoming champions.

India Rush got off to a great start as they scored an early goal which turned out to be the winner. Pradip Pal registered his name on the scoresheet in the ninth minute of the game.

GM Sports Club created a few opportunities of their own but could not beat the India Rush defense. India Rush held on to the early goal and stood firmly in the back, keeping a clean sheet against the second-placed team.