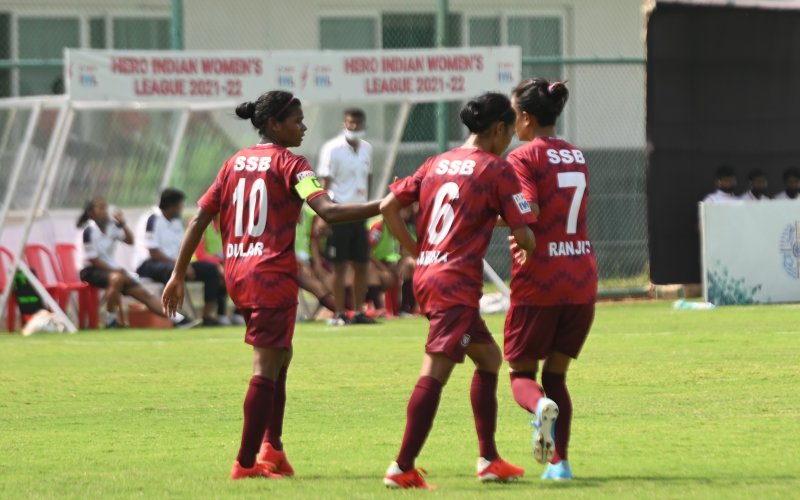 SSB Women scripted a magnificent 5-2 comeback victory over Odisha Police in the Hero Indian Women’s League 2022 at the Capital Ground in Bhubaneswar on Saturday, May 21, 2022.

The local side took an early lead in the game after some confusion between the SSB Women defenders resulted in Suman Pragnya Mohapatra going one-on-one against the goalkeeper. The No. 20 made no mistake to put the ball past Manju and give her side the lead.

However, SSB Women’s in-form skipper Dular Marandi had a day to remember and pulled one back in the 27th minute. The forward’s scuffed shot ended up in the bottom left corner of the goal. She went on to score the second in the 37th minute with a perfectly-timed header from inside the box after SSB Women won a free-kick in a dangerous area.

Naorem Sumila Chanu made it 3-1 just before half-time as the No. 9 was left unmarked by the Odisha Police defenders on the left flank. The local side took an early lead in the game but the team from West Bengal bounced back hard and dominated the proceedings.

After switching sides, Dular Marandi completed her hat-trick by scoring her side’s fourth goal in the 57th minute. The skipper met Sumila Chanu’s diagonal cross and tapped it in from the mouth of the goal. Minutes later, the No. 10 once again got onto the scoresheet, this time from a very difficult angle.

With the score 5-1, SSB Women had all but confirmed the three points for themselves and killed time to frustrate the opponents. Odisha Police, however, fought back to score another in the dying seconds of the game. Lochana Munda’s goalbound cross from the right flank was too hot to handle for the SSB Women goalkeeper and she spilled it into her own net.