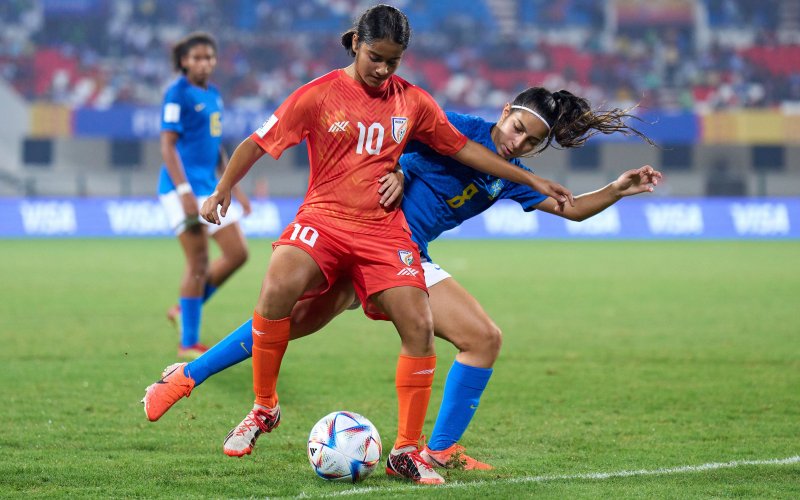 India’s campaign in the FIFA U-17 Women’s World Cup 2022 came to an end at the Kalinga Stadium in Bhubaneswar on Monday, October 17, 2022, when they went down to Brazil 0-5 in the concluding Group A encounter.

Playing against a Brazilian National team at any level or competition is always a lifetime opportunity and the presence of a strong crowd in the stands proved how keen the fans were to witness the memorable moment for Indian football.

The mood perhaps was no different among the Indian footballers in the middle. Yet, for them, it was the best of times, it was the worst of times. While they indeed enjoyed the unforgettable night and made their presence felt too at times, they looked often overwhelmed by the complete dominance of the Brazilians, who were far ahead in skills.

But everyone present at the Kalinga Stadium would certainly vouch that the Indians held their heads high despite the margin of defeat. Physically the Brazilians were far superior to their rivals, but the Indians did make some inroads in the Brazil goal area on more than one occasion.

India, who finished their campaign without being able to score a goal in three matches, had their best chance in the 31st minute when Neha broke through off a counter attack. While Grazy made a desperate attempt to stop Neha, the Indian striker took a hurried shot that made Brazilian goalkeeper Leilane’s job easier than she expected.

India conceded the first goal in the 11th minute when they failed to sustain a free-flowing attack from the right initiated by Aline. The attacking midfielder, who plays for SC Internacional, swept past Astam Oraon and essayed a centre for her club teammate Gabi Berchon, who made no mistake.

The second goal came in the 40th minute almost in a similar manner. This time Ana Flavia, who plays for Sao Paulo FC, caught the Indian defence on the wrong foot with her lovely footwork and passed the ball from the right for Aline to finish.

The deficit of two goals notwithstanding, the Indian girls did their best to keep up the fight and often could take it to the opponents’ goal area. While Neha and Anita Kumari were trying their best, Kajol D’Souza and Shailaja should also be given the credit for their fighting spirit. Given the overwhelming nature of Brazilians’ attacks as they camped exclusively in the Indian area, goalkeeper Melody Keisham should be complimented for her courageous display. Once, however, she was found wanting as she perhaps could have done slightly better when Aline scored the second goal.

There was a time in the first half when Brazil forced three consecutive corner kicks, but a determined Indian defence managed to avert the danger every time.

In the second half, India conceded the third goal within six minutes of the start as Aline’s strong shot from a distance had Melody beaten. Four minutes from close, substitute Lara scored the fourth goal and she found the mark again well into the add-on time. Both were stunning long rangers that established the superiority of Brazilian football.

Hero ISL 2022-23: Matchweek 1 & 2 Round-Up
Vocal crowd back in the stadium is a big positive for Mumbai City FC