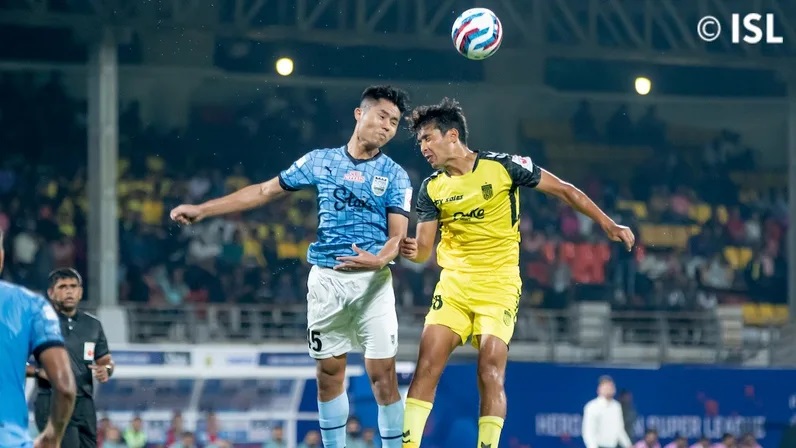 The floodlights sparked to life and fans returned to the stands across the nation’s football stadiums as the new season of the Hero Indian Super League (ISL) kicked off on October 7th, Friday.

An invigorating atmosphere set the stage for some absolutely compelling clashes with a few surprising results. As things stand, defending champions Hyderabad FC, Mumbai City FC, Chennaiyin FC and Bengaluru FC are all tied on four points. The Nizams take top-spot because of a superior goal difference. At the other end of the table, Jamshedpur FC, East Bengal FC and NorthEast United FC are yet to get off the mark this season.

Let us take a walk through the first couple of match weeks and see how the teams have started their respective campaigns this season.

After finishing third in the league last season, ATK Mohun Bagan were knocked out in the play-off semi-final against Hyderabad FC, who went on to lift the trophy. Head coach Juan Ferrando was retained by the club as they brought in quite a few defensive reinforcements.

The Mariners got off to a shaky start this season as they lost in their own backyard against Chennaiyin FC. The hosts experienced defensive frailties late in the second half that enabled the visitors to nab a comeback win.

However, ATK Mohun Bagan bounced back in style against rivals Kerala Blasters in the next game. The Mariners conceded the first goal but fought back and won the game 5-2 with Dimitri Petratos scoring the first hattrick of the Hero ISL season.

The previous season was one to forget for Bengaluru FC as they finished sixth and failed to qualify for the playoffs. Eight new faces, including prolific striker Roy Krishna, were brought on board and Simon Grayson was put in charge of them in an effort to bring the glory days back.

The Blues kickstarted their campaign at home, in front of almost 20,000 fans, against NorthEast United. An 87th-minute Alan Costa winner nabbed all three points for the hosts in a game that had 0-0 written all over it.

With 3 points in the bag, the Blues travelled to Chennai for their next match. This time around, the Blues had to settle for a point after Krishna’s opener was nullified by Prasanth Karuthadathkuni just before half-time.

Two-time Hero ISL winners Chennaiyin FC revamped their entire squad with a massive rebuild before the new season. They finished 8th in the league last season. To turn things around with a plethora of new players, Thomas Brdaric was appointed as the head coach.

The new-look Marina Machans were off to a flyer after Kwame Karikari scored one and assisted the other, late in the second half, as Chennaiyin came from behind to notch their first-ever win against ATK Mohun Bagan in the Hero ISL.

Hosting Bengaluru FC was the next challenge for Chennaiyin FC. Both sides remained unbeaten after the match ended in a 1-1 draw, with Prasanth Karuthadathkuni cancelling out Roy Krishna’s goal, at the stroke of half-time.

The 2022-23 Hero ISL is East Bengal FC’s third season in the league. In their first season, they finished ninth and last season, they were rooted to the bottom with only one win in the entire season. Quite a few new players were added to bolster the squad as Stephen Constantine was named the head coach.

Constantine mentioned that the revival of the club would not be an overnight process. The Torch Bearers were in action on the opening day when they were beaten quite convincingly by Kerala Blasters.

The second game, however, was tightly contested against FC Goa. The game was tied 1-1 at the 90-minute mark before Edu Bedia’s long-range freekick broke East Bengal’s hearts in the final minute of stoppage time.

Last season was nothing short of a nightmare for FC Goa as they won just four out of 20 games and finished ninth in the table. The side appointed former player Carlos Pena as their head coach and introduced some fresh faces to the squad this season.

With the youngest squad in the Hero ISL this season, The Gaurs played once during the first two matchweeks and that clash was away from home, against East Bengal FC. Brandon Fernandes put the visitors ahead in the eighth minute.

A 64th-minute Cleiton Silva penalty squared it up before FC Goa stole all three points at the death courtesy of a goal from Edu Bedia’s free kick.

Hyderabad FC finished second in the league phase last season but went on to lift the trophy after securing wins over ATK Mohun Bagan in the semi-final and Kerala Blasters in the final. This season is head coach Manolo Marquez’s third season with the defending champions.

The Nizams, with their reinforced defence, travelled to Pune where they were involved in an enthralling 3-3 draw with Mumbai City FC. Joao Victor bagged a brace for Hyderabad FC that night after a stellar performance in midfield.

The defending champions netted three again in their next fixture against NorthEast United. However, they secured all three points this time and managed to keep their first clean sheet of the season.

The feat of losing just three games in the league phase last season awarded Jamshedpur FC with the Hero ISL Shield 2021-22. In the play-off semi-finals, they were knocked out by Kerala Blasters.

Head coach Owen Coyle was replaced by Aidy Boothroyd this season as the Red Miners strengthened the central parts of the team. In their only game so far this season, Jamshedpur FC hosted Odisha FC.

The hosts were two goals up after ten minutes. It seemed as if this fixture would be a cakewalk for JFC. However, the deficit was down to one just seven minutes later. The game turned on its head in the final few minutes as the Hero ISL Shield holders started their campaign with a loss.

Kerala Blasters were in action at home for the opening day encounter against East Bengal FC. After finishing as runners-up last season, they retained head coach Ivan Vukomanović and were pretty active in the transfer market.

The Tuskers kickstarted their season with a convincing 3-1 win over East Bengal, in front of almost 35,000 spectators. Kerala Blasters made their intentions clear about their approach this season after the comfortable victory.

In the second game against rivals ATK Mohun Bagan, the Blasters were off to a flyer. However, complacency at the back allowed the Mariners to get shots at goal. Kerala Blasters paid the price for it as their winless streak against ATKMB extended to five after a humiliating 5-2 loss.

The final play-off spot was snatched by Kerala Blasters as Mumbai City FC missed out on it by just three points in the league last season. Des Buckingham replaced Sergio Lobera for this season as the side signed promising players like Greg Stewart and Rostyn Griffiths.

The Islanders’ first match was a tricky one against defending champions Hyderabad FC. The two strong sides provided spectators with a spectacular six-goal thriller and the points were shared at full-time.

Playing at home in the second match of this campaign, Mumbai City FC pocketed their first three points and clean sheet of the season against Odisha FC. The game lost impetus due to a lot of stoppages but that did not stop the Islanders from nabbing a much-needed win.

Since the inception of the Hero ISL, NorthEast United’s journey in the league has been topsy-turvy. They qualified for the playoffs two seasons ago and then finished tenth last season. To bring stability to the club, Marco Balbul was appointed as the head coach this season.

The Highlanders, after doing decent business in the transfer market, were up against Bengaluru FC in their first game of the new season. After conceding a late goal, NorthEast United’s equaliser was controversially disallowed in the dying minutes, handing them their first loss.

Things went from bad to worse as the Highlanders failed to score in their second game as well. The defending champions brought their A-game to Guwahati and waltzed away with a 3-0 victory leaving NorthEast United rooted to the foot of the table.

Odisha FC finished seventh in the league last season. The club has brought head coach Josep Gombau back after two seasons. A plethora of promising talent, including the return of Diego Mauricio, could turn Odisha FC into the dark horse this season.

The ability of the squad was on display when the Juggernauts visited Jamshedpur. After going 2-0 down inside the opening ten minutes, Odisha FC kept their composure and turned the fixture on its head in the final minute of the game.

In the second game, against Mumbai City FC in Mumbai, both sides were sluggish as the Juggernauts failed to breach the defence. Ultimately, the hosts wrapped up all three points as Odisha FC failed to score.

A Lot In Store This Season

The fans are back and the atmosphere across several stadiums is electrifying. This was just a summary of the games that took place in the first two matchweeks. Plenty more dramatic, exciting and unpredictable Hero Indian Super League matches are coming your way this season.