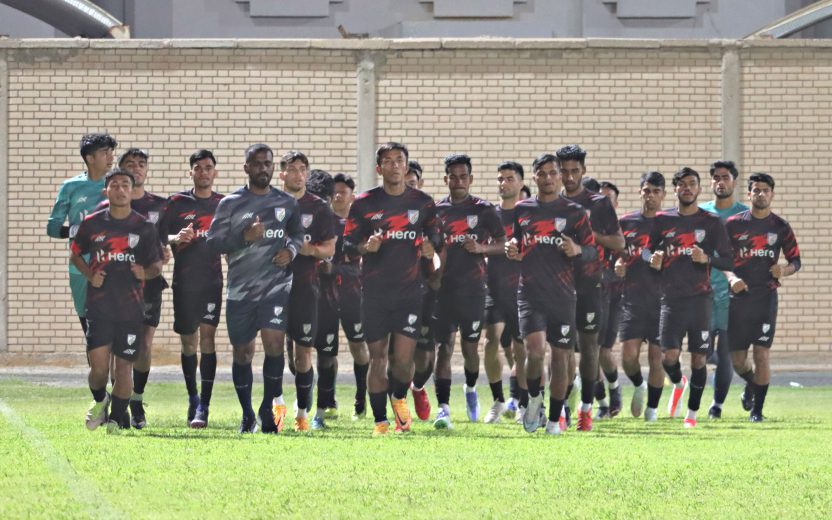 KUWAIT CITY, KUWAIT: The India U-20 Men’s National Team will be looking to put the defeat against Iraq behind them as they take on Australia in their next match of the AFC U-20 Asian Cup Uzbekistan 2023 Qualifiers.

India will next face Australia at the Ali Sabah Al-Salem Stadium in Kuwait City, with the match kicking off at 7 PM IST, and streamed live on the Indian Football Team Facebook page.

“We saw Australia’s match against Kuwait last night, and they are of course a very good team. They are the favourites to top the group, and we will have to be at our best against them,” said head coach Shanmugam Venkatesh. “That being said, if we stick together as a team and put in the hard yards, we can come out with the result against them too.”

The first round of matches in Group H ended with a 4-2 victory for Iraq against India, while Australia defeated hosts Kuwait 4-1 in the second match of the night. These results put Australia and Iraq in the respective top two spots on the table, while India and Kuwait occupy third and fourth places, respectively.

“The boys put out a good performance in the match, and I was quite happy with the way they fought till the very end,” said Venkatesh. “It is crucial at this level to get the international match experience before playing sides with such intensity. We could not have much international experience due to the COVID situation, but the way our boys fought out there, showed that they have had the best domestic preparation that they could possibly get.

“With the kind of domestic preparation we had, they have done quite well, and they showed their character.”

“Most of the goals that we conceded were in the first 10 minutes in the first half or the second half. If we could eliminate that initial lack of concentration, we can really do well,” he said. “But the main thing is they showed character and grit, and that’s what I always want to see on the pitch.”

“Yes, we did make a couple of mistakes that cost us on the pitch, but we will correct those and go again in the next game. It’s always a learning process – that’s football,” said Venkatesh.