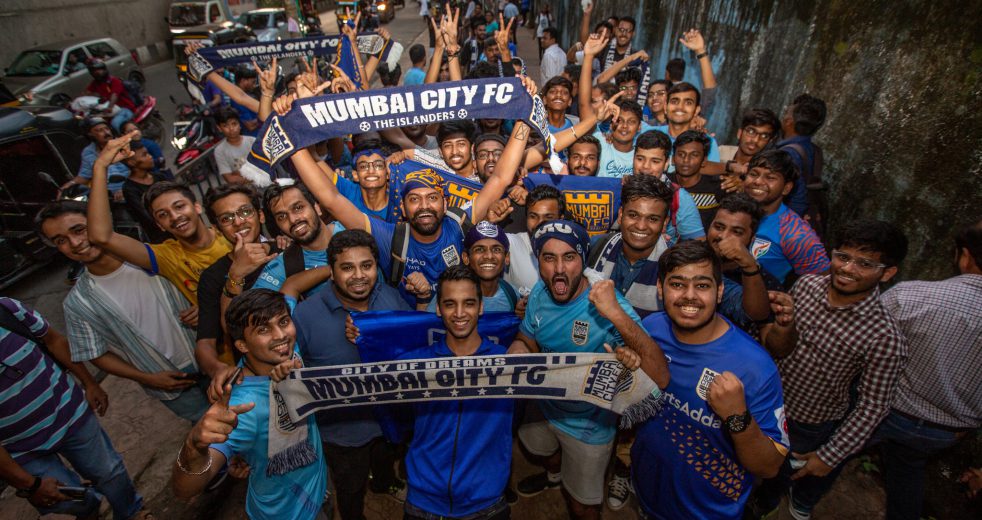 Returning after a gap of two years, fans came out in numbers at the Mumbai Football Arena in support of the Islanders, singing and chanting all the way till the final whistle of the game.

Mumbai City FC Head Coach Des Buckingham looked in high spirits at the press conference post their 2-0 win over Odisha FC in front of a vocal crowd. He was strongly appreciative of the overwhelming response he and his team received throughout the game stating the experience as ‘the best two and a half hours of his life’

“I’ve really enjoyed the last two and a half hours of my life. To play at home for the first time in over two years and the way the fans welcomed the team was (just incredible). They didn’t stop singing throughout the game hence the game played out the way it did and certainly, we finished (in the same manner). I hope we’ve sent them home happy, with three points and the way we’ve played” mentioned an elated Coach.

It was not just the players who missed the experience it was the fans too. “Meeting everyone after two years it felt like I was coming back from the dead,” says an excited Joseph – West Coast Brigade member. “The feeling is unanimous, I think this was the result we all deserved as fans and also to the whole city and Bipin Singh scoring in the Injury time was just the Cherry on the cake,” added Aadarsh – a fellow member.

Bipin Singh who became the Club’s top scorer with 15 goals after his injury-time winner had a special chant from the fans – ‘We love Bipin Singh, running down the wings, here west coast sings, we love Bipin Singh’.

The official attendance figures showed just 4128 people present in the stadium which isn’t unusual for the city considering the years before the pandemic the attendance was around the same numbers. However, this time around the crowd didn’t seem like casual fans attending the game because they had nothing else to do. This time it was different, throughout the ninety minutes and post the match, there were constant chants and songs around the stadium. While the stand that West Coast Brigade would occupy has always been vocal with chants, this time around the energy and enthusiasm was felt in other stands as well.

All the way from Pune

Vishwajit Chavan, a corporate employee from Pune had been eagerly waiting to cheer for the Mumbai City FC from the stadium. He had earlier visited the Balewadi stadium but had unknowingly ended up with home fans, this time around he had traveled all the way from Pune for the home game. While the win was exciting the icing on the cake for Vishwajit was an opportunity he had to meet his heroes, “It was a good game and we won but the most memorable part for me was I got to meet Jahouh – my favorite player for Mumbai, I got to take pictures with Bipin Singh, Mourtada Fall and head coach Des Buckingham. I also got to meet Amrinder and Raynier – they were former Mumbai City players.”

Vishwadh Rane, a Lal Baug resident and a college friend of Vishwajit, has been a Mumbai City FC fan ever since the first ISL Season. “I have been following Mumbai from the very first season, I have watched Andre Mortiz’s hattrick at DY Patil Stadium and many other memorable games with Anelka, Forlan who all played for the club. It has been a great and exciting journey”.

Speaking about the upcoming game, Des had mentioned “Hopefully, the support continues for next week and we want to see as many of them back in here when we play Jamshedpur FC.”  Mumbai next faces Jamshedpur at home in another weekend encounter and fans are already planning for the next game, “Regarding the Jamshedpur game, we will definitely come up with something new. The team and players will always have something to look forward to, whenever they come to play at Mumbai Football Arena.” Says West Coast Brigade.

Puridas had come alone for the game but left having made new friends. The Trio now have made plans to watch every game this season in the stadium with Vishwajit even planning to travel to the city for weekend fixtures. The return of fans was a great sign for the club, and If the first home game is anything to go by, it looks like Mumbai City FC will have no shortage of support this season.