There are a number of new teams in the ongoing Hero Indian Women’s League 2021-22 season that we have witnessed, but there is one among them that has come through to the league with a motto that says “we can and we will”, something that typifies them as one of the many Superheroes of Indian Football.

Debutants Mata Rukmani FC come from an ashram in the Bastar district of Chhattisgarh, which aims to promote talented local girls through the beautiful game. This will be their first foray into the Hero IWL, having won the Chhattisgarh league twice in 2020 and 2022, respectively. The team includes young girls from tribal areas between the age of 15 to 20; some of these girls have also played in the U-17 Women’s Football Tournament in Kalyani, in 2019.

Padma Shri Dharampal Saini, a freedom fighter, had started the Mata Rukmini Devi Ashram in 1976 dedicated to girls’ education and well-being in a state where people in the villages used to believe that educating a girl was a waste of time and money. He took up the challenge to start the ashram with 8 girls and now more than 3000 girls are based in the ashram. Besides several academic achievements, sports were also included in their day-to-day regime, football being one of them.

Dharampal Saini, fondly known as Tauji, was himself an athlete in his early days and when he saw the girls with stamina, he started preaching yoga and then went ahead with other sports such as kabaddi, marathon running, archery, and football. He believes, “If my girls can be good in education, they can also be good in sports too. So I encouraged them to play as much as they want, and this is the reason they are representing our state in the Hero IWL.” 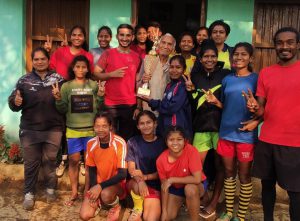 “In the early days, we used to coach the girls through TV, watching Messi and Ronaldo as we did not have proper coaches, but as the girls started to perform well, we got coaches who helped them to nurture more,” he added.

Saini also believes that educating a girl in today’s world is very important, as it helps in the overall growth of the country. “I believe that every parent should send their girl child to school and educate them as they are the future of our country. Once they start going to school, people will see the change in their mentality and behaviour with the outside world,” Saini stated.

Despite existing in the shadows of big cities, and all the odds Mata Rukmani FC vowed to achieve the unthinkable and has found a way to represent them in the national league without having proper facilities in their town.

Back in the ashram, these brave hearts don’t have the access to training grounds as well as they don’t have proper boots, diets, fancy kits but that doesn’t stop them to follow their passion for football. 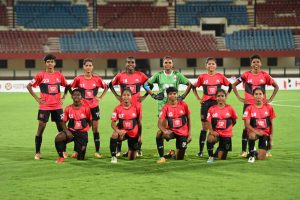 Head Coach, Sandeep Singh said, ”We love football and my girls love playing football and we are elated to participate in such a big tournament and also excited to play against big teams such as Indian Arrows who has the best players, Gokulam Kerala FC, Sethu FC. We all have worked very hard to come here and show our true selves.”

“The most important thing for my girls is to have this experience of being able to talk and learn from the best in the country,” he added.

These girls did not have a life, they used to walk around 7-8 Km daily in search of water but now some of the girls have taken up government jobs as well.

Assistant Coach, Yogesh Kumar Jangra said, “There are many tribal girls who come to our ashram to play and we never say no to them. From those, we select the best and give them the chance to represent themselves in the national competitions” 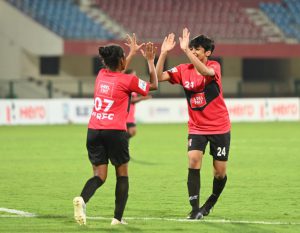 “All the girls are very excited to compete as it is the first time they are participating in such a big platform with all the facilities around- food, diet, training, good grounds. They are the girls who live in the jungles and haven’t seen all of these. They are enjoying here as all of them have come out of their state for the first time”

Mata Rukmani FC have played 4 matches out of which they have won their first match against Hans Women FC on April 27, 2022, at the Kalinga Stadium and collecting the three points.

After the win, Head Coach Sandeep Singh quipped, “The victory is for my girls. We are a very young squad with three 15-year-olds in the starting XI- Sulekha, Ripika, and Pinki. The oldest one in our squad is 20 years old and they are getting to learn a lot from these games.”

“I am very thankful to Odisha Government and the AIFF for organizing the tournament with such good facilities with almost discipline,” concluded Coach Sandeep.