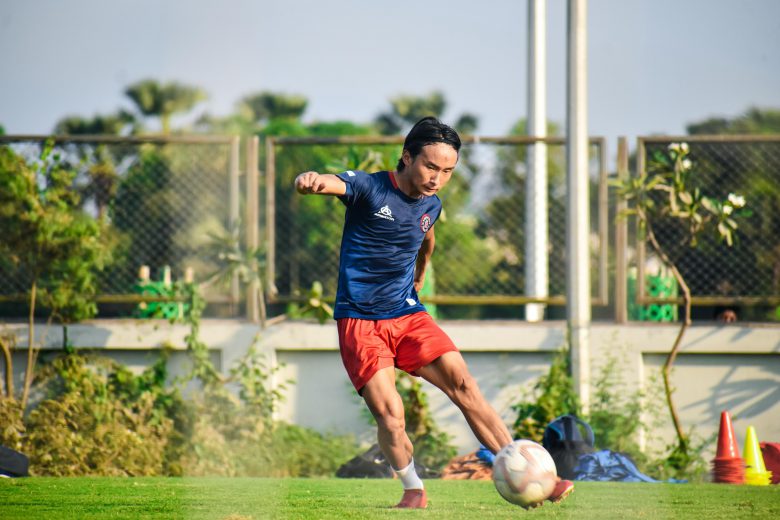 Rajasthan United FC have had a memorable debut season in the Hero I-League, finishing in the top 7 of Phase 1 and qualifying for the Championship Stage. Under the leadership of young coach Francesc Bonet, a good mix of youth and experience have caught the eye with their possession-based style of play and defensive discipline.

One of these players, on the lower end of that age spectrum, is 17-year-old Gyamar Nikum who has appeared in 11 of their 14 games this season. Hailing from the Takey village in Arunachal Pradesh’s Kurung Kumey district, Nikum has had a whirlwind last few years.

“I started playing football in school when I was in fifth grade and by the age of 14, I had played in the U15 sub-junior national championships for my state team where we were the runners-up,” he said. “I watched the FIFA World Cup 2014 with my father and that was when I really liked Lionel Messi’s performances.”

It was in that tournament where the attacking midfielder was scouted by Rajasthan United and offered a chance to be a part of their residential academy in Bhilwara. After impressing then coach Vikrant Sharma, he was fast-tracked into the first team squad.

“After I passed my Class 10 exams, I thought of going outside the state to try and become a professional football player and since I have come to Rajasthan, it has all happened really fast for me. I really want to thank the owners for giving me a chance to play in this very big league,” he smiled.

Nikum now finds himself inside a dressing room filled with experienced professionals like captain Abhishek Ambekar, former La Liga players Omar Ramos and Mauro dos Santos, and of course former Hero I-League golden boot winner Pedro Manzi, and the teenager is soaking in all the advice he can get.

“It feels really great as they are really great seniors. They always help me, inside and outside the field of play. If I would have to choose a mentor, I would pick Pritam (Singh), because he’s my roommate and we play in the same position. He always has my best interests at heart and guides me every day,” said Nikum.

The north-eastern region of India has become a football factory over the last decade or so with players from Manipur, Mizoram and Meghalaya present in teams across the country but Arunachal Pradesh is still lagging behind on that list.

“In Arunachal Pradesh, we have many good players but there are a lot of financial problems. We don’t have an academy or a professional club to play at a high level. I just want to request our government to address this situation so that more local players can train and become professionals,” said Nikum.

At the rate his game is progressing, it shouldn’t be long before Nikum goes from hot prospect to the first name on the team-sheet, but he is keeping himself grounded and focused on the task at hand.

“For this season. I’m just trying to play for my team and trying to prove myself to the coach and the owners that I can help the team to have a great season,” he concluded.