Carlos Pena: At Fatorda, I want fans to make life difficult for the opponents 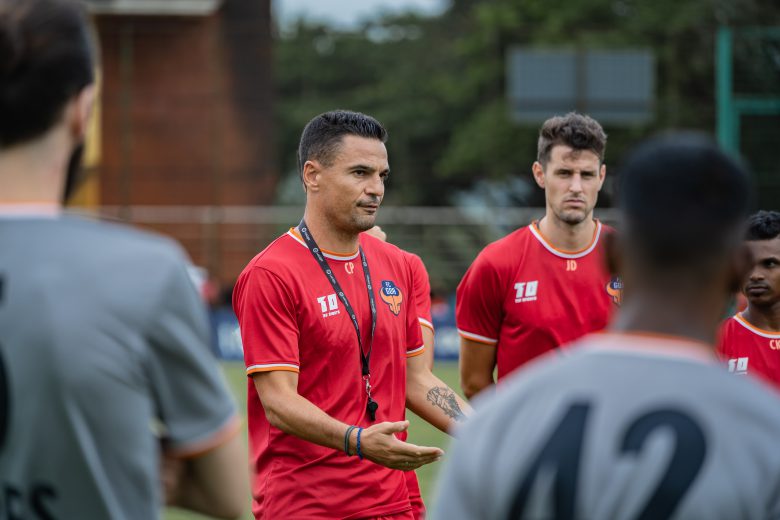 Carlos Pena’s first season as FC Goa’s head coach has gone off to a positive start as the Spaniard saw his side claim two victories from the opening three games. And now, finally, he comes home, to play in front of fans who once adored him as a player. Now he wants them to have his back as their gaffer.

Speaking of playing at the Pandit Jawaharlal Nehru Stadium in Fatorda in front of Goa’s vociferous crowd, he reached out to the fans, saying, “I want to play in front of a full stadium. That’s how I last played here. I know about the passion the fans have for football and the Club. They have always had our back and I’m sure they will be there for us again.

“Last time, we couldn’t get any point despite trying till the last minute. We learnt a  lot and now look forward. I want to thank the fans who traveled to Hyderabad, you guys are wonderful. We are waiting for you on Thursday in Fatorda. Together we are stronger!

“I really feel that we are one team and we need to create an environment that makes our opponents afraid every time they think of playing in Goa, to make their lives on the pitch difficult. And I promise that we will fight to put a smile on our fans’ faces and to make them happy.”

Going to Fatorda, a special feeling

One can say it’s fate, others, just coincidence. When FC Goa walks out to the pitch on Thursday night, it will be 972 days since the Goa faithful experienced a home match at the PJN Stadium in Fatorda. Pena brought down the curtains on his playing career the last time the Gaurs visited their fortress and now he will be looking to consolidate on a bright start to his coaching career.

The Spaniard helped script many a memorable night at Fatorda. And now he looks back at his time in the Orange of FC Goa with much fondness.

“It gives me chills thinking about going back to Fatorda. It’s a special feeling. All of us are very excited. We are looking forward to being back in the stadium, playing in front of our fans. And hopefully, we can give them a victory,” the Spaniard stated.

“I remember the trips to the stadium before every matchday. The colours would get more Orange as we got closer to Fatorda. Looking at them welcoming us to the stadium – it made us feel like we were coming home.

“Last time I was on the pitch, I didn’t know that would be my last time playing. No one knew that would be the last time in so many years, the fans would see their own team. This has been a learning experience for all of us around the world. It has taught us that we need to celebrate every moment that we have together.”