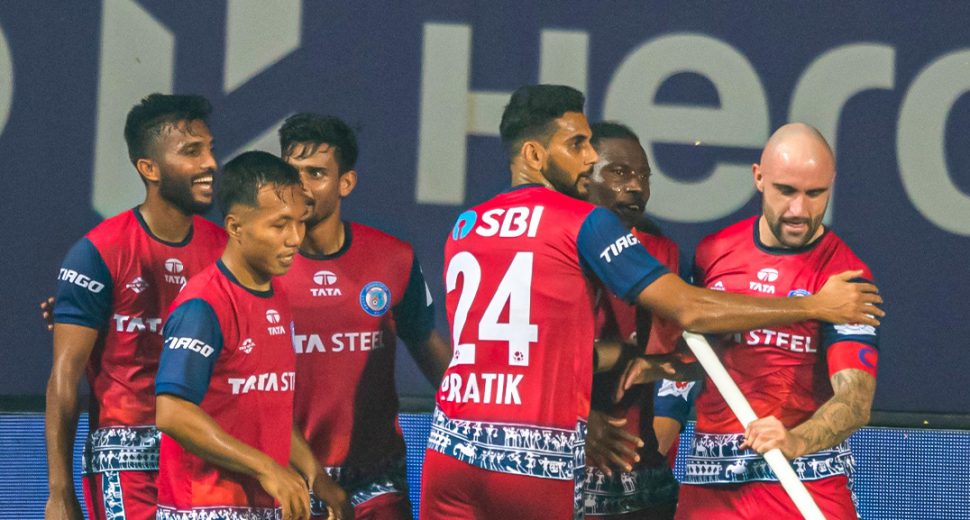 The hosts received a defensive boost as Hartley returned to the starting line-up and Eli Sabia dropped to the bench. An injury ruled midfielder Germanpreet Singh out of this game, and he was replaced by Farukh Choudhary.

Marco Balbul switched to a 5-man backline as he made five changes to the side that lost against East Bengal last week. Joe Zoherliana, Mashoor Shereef, and Aaron Evans started in defence. Imran Khan replaced the injured Romain Philippoteaux in midfield, and Mirshad Michu replaced Arindam Bhattacharja in goal.

The Highlanders did well to keep Jamshedpur at bay till the half-hour mark. A minute later, the Red Miners found the breakthrough via Hartley. Harry Sawyer rose highest to head Wellington Priori’s corner towards goal. His effort landed at the feet of Hartley, and the Jamshedpur FC skipper calmly side-footed the ball into the back of the net.

In the 52nd minute, Sawyer was picked out by Boris. The striker adjusted his footing, but his effort was blocked. Moments later, Chukwu outmuscled his marker and got his shot away, but that was blocked as well. At the other end, Imran’s attempt from the left flank was saved brilliantly by TP Rehenesh. The keeper produced a finger-tip save to deny the midfielder.

NorthEast United failed to gain an advantage whenever they received the ball in the final third.

The win lifts the Red Miners up into sixth place, six points off the top with a game in hand. They will travel to Goa for their next match on November 3. The Highlanders remain at the bottom of the table and will return home to host Kerala Blasters on November 5.

Carlos Pena: At Fatorda, I want fans to make life difficult for the opponents
Fans excited for FC Goa homecoming