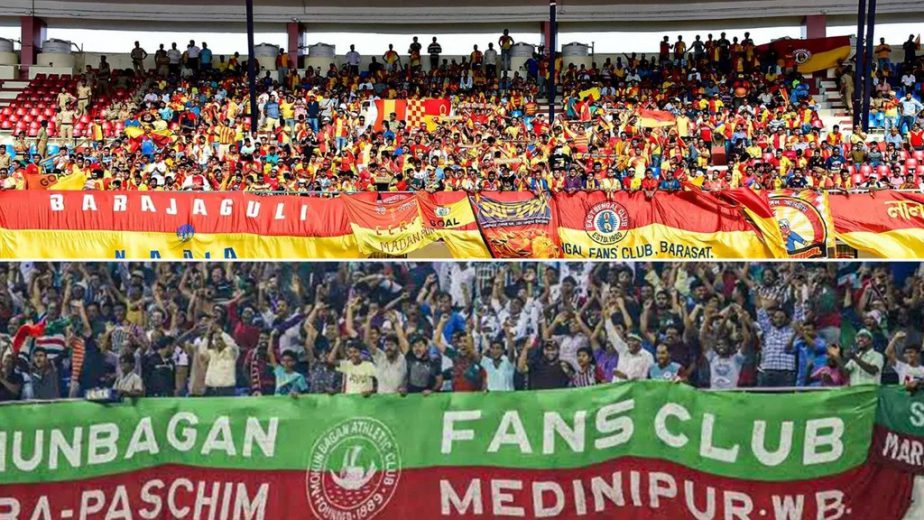 The ‘boro match’ has seen a lot of fierce encounters in the last decade, today we take a look at some of the memorable games between these two sides over the last 10-12 years.

The Mohun Bagan vs East Bengal fixture, popularly known as the Kolkata Derby is a 100-year-old footballing rivalry with a rich history. The match is locally known as the ‘boro match’ which means ‘big match’ in Bengali. The first match between these two sides was played on 8 August 1921 in the Coochbehar cup, which ended as a goalless stalemate. Since then, both of these sides have battled it out against each other around 382 times, in which, East Bengal came out victorious 132 times and Mohun Bagan won 125 games. The rest of the games ended in a draw.

Both East Bengal and Mohun Bagan joined the Hero ISL two seasons back.  Ahead of the first ISL fixture that is going to be played in front of home fans in Kolkata, we take a look at some of the memorable games between these two sides over the last 10-12 years

To commemorate their maiden triumph of the prestigious Calcutta Football League in 1934, the Mohammedan sporting club organized the platinum jubilee cup with Mohun Bagan, East Bengal, and the world’s first-ever football club Sheffield FC being the participants. Mohun Bagan and East Bengal made it to the final of the two-day contest and produced a goal-fest. Alvito D’cunha put East Bengal in front in the stoppage time of the first half, but Mohun Bagan returned in the second half with goals from Satish Kumar and Ashim Biswas giving them the lead. Their celebrations didn’t last long as Robin Singh equalized for East Bengal and the game went to extra time. East Bengal looked to have won it when Robin scored again in the extra time to make it 3-2 in the 101st minute of the game. But, Mohun Bagan responded well and Harpreet Singh’s strike took the final to penalties, which East Bengal won 3-2.

A wave of violence erupted at the Salt Lake Stadium as this derby fixture was forced to be called off.

It all started when East Bengal took the lead through Harmanjot Khabra from a Mehtab Hussain freekick in the 43rd minute of the game. Things started to heat up when Bagan’s star recruit Odafa Okolie was given a straight red card by referee Vishnu Chauhan for expressing his displeasure. Soon after the incident, Mohun Bagan fans started pelting stones and bricks at the field, one of them hitting a Mohun Bagan midfielder Syed Rahim Nabi’s face. He was quickly hospitalized and Bagan players came off the field. The match was then called off after Bagan refused to field their player’s in the second half. Mohun Bagan was given a two-year suspension for the same reason.

East Bengal clinched the Calcutta Football League title for the 6th consecutive time by thrashing Mohun Bagan 4-0 in their penultimate game of the league.

In front of a packed 65000 crowd at the Salt Lake Stadium, East Bengal’s South Korean star recruit Do Dong-Hyun netted two freekicks in the first half while goals from Muhammad Rafique and Rahul Bheke in the second half completed a 4-0 rout against their arch-rivals, Mohun Bagan.

This was the last Kolkata Derby game in the I-league era. Mohun Bagan made it one to remember as goals from Joseba Betia and Baba Diawara on either side of the break gave the Mariners 3 points and the much-needed edge in their title race with East Bengal’s consolation goal coming from Marco’s Jimenez in the 72nd minute being too late.

One of the dramatic encounters between the two sides in the ISL has to be the 2021 fixture where a young Kiyan Nassiri, son of former East Bengal legend Jamshad Nassiri stunned the red and gold with his second-half hat-trick heroics that won the game for the Mariners. Darren Sidoel had given East Bengal the lead in the 56th minute of the game, but Kiyan came on and soon equalized in the 64′ minute, However, his dramatic double strike deep in the injury time killed the game for East Bengal as Mariners extended their winning streak against the rivals.

Today as Kolkata prepares for another derby day, it will be interesting to see whether Juan Ferrando’s high-flying ATK Mohun Bagan come on top or will it be Stephen Constantine’s pragmatic East Bengal that breaks the jinx, either ways expect a high-octane encounter.

Also Read: Sekar sinks Bengaluru FC as Odisha FC pick up third win of the season and go top of the table