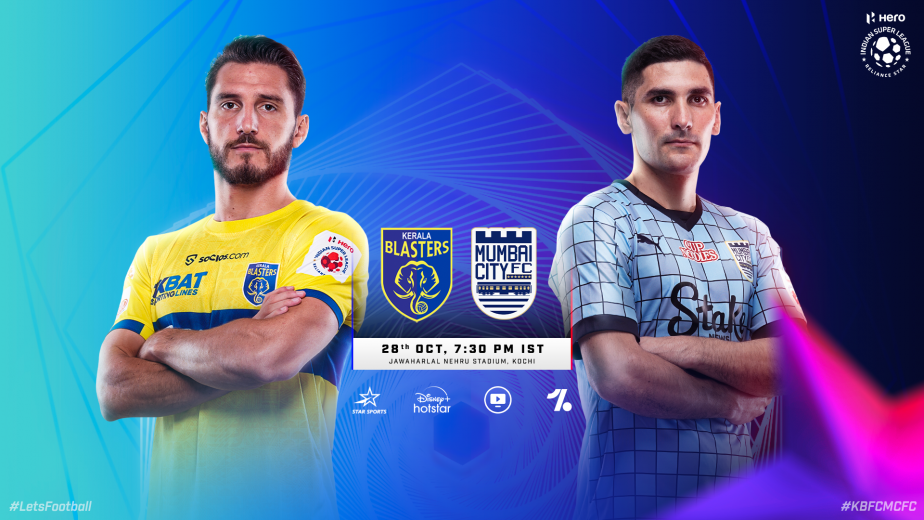 Kerala Blasters FC will be keen on ending their two-game losing streak in this season’s Hero Indian Super League (ISL) when they host Mumbai City FC at the Jawaharlal Nehru Stadium in Kochi.

In their last two games, the Blasters have lost at home against ATK Mohun Bagan before suffering a late defeat in Bhubaneswar against Odisha FC last week. The Islanders, on the other hand, are yet to lose a game but have drawn two out of their three games so far.

Kerala Blasters head coach Ivan Vukomanovic stated earlier this season that his team likes to play attacking football. This has been evident so far as the Blasters have had more of the ball and registered more goal attempts than their opponents in two out of three games. However, they are also currently the team to concede the most number of goals, having shipped 8 in three games.

Vukomanovic has kept faith in his defenders despite the losses. The Blasters are likely to field an unchanged eleven yet again when they face Mumbai City FC. Should they think of shoring up their defence, they have the option of dropping one of their overseas strikers to the bench to include Victor Mongil in defence alongside Marko Leskovic.

“Mumbai is always one of the biggest title contenders. They always come with a clear intent of winning the game and contesting for the title. We are a team that wants to compete against the strongest teams,” said Vukomanovic. “Tomorrow, it depends on how we start and approach the game. Last year we managed to play two good games against them, but this year it is entirely different. We want to prepare well and show our fans that we are capable of getting a good result,” he added.

Mumbai City FC had made four changes to the side that featured in the thrilling 3-3 draw against Hyderabad FC in Matchweek 1. Two of these changes were made at the back as Mourtada Fall and Mandar Dessai were replaced by Mehtab Singh and Sanjeev Stalin. The other two changes included Ahmed Jahouh and Alberto Noguera in the starting XI.

Head coach Des Buckingham has retained that line-up since. His side has only conceded once in the last two games, and Mehtab Singh has bagged two back-to-back Hero of the Match awards, becoming the first Indian defender to win it this season.

“We don’t focus on the runs of other teams. The most important fact is that we only have 20 games in the season, and every game is important. We know the qualities that Kerala Blasters have, and we have to be at the top of our game to stop that,” said Buckingham. “We need to continue playing like we have, not just in the last three games but also during the Durand Cup and Champions League as well. We are expecting a very good game tomorrow,” he added.

The two sides have faced each other 16 times in the Hero ISL. The Islanders have won six, while the Blasters have won four. Six encounters have ended in a stalemate. Two out of four wins for Kerala Blasters came last season when they did the double over Mumbai City FC. At this venue, both sides have registered one win over the other while four games have ended in a draw.

Sekar sinks Bengaluru FC as Odisha FC pick up third win of the season and go top of the table
Kolkata Derby: Memorable games from the last decade