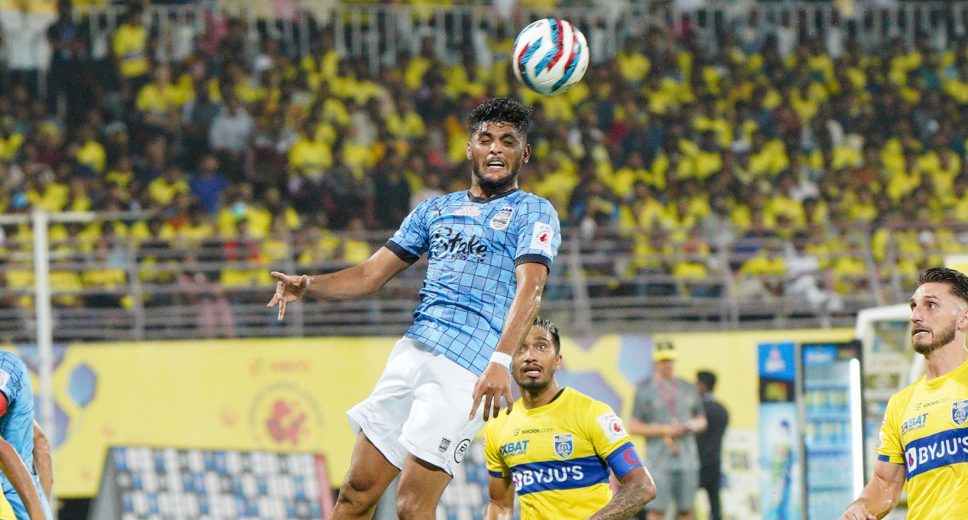 First-half goals from Mehtab Singh and Jorge Diaz were enough to secure all three points for the Islanders. Kerala Blasters lost their third consecutive game after winning the ISL opener earlier this month.

The hosts made two changes to the side that lost in Bhubaneswar last week. Ruivah Hormipam was replaced by Victor Mongil. Up front, Ivan Kaliuzhnyi dropped to the bench as Rahul Kannoly Praveen took his place in the starting line-up. Mumbai City FC made just one change to their line-up – Diaz returned to the starting eleven as Alberto Noguera dropped to the bench.

The Islanders retained their record of scoring the first goal of the game in the Hero ISL as they took the lead after 21 minutes. The hosts failed to clear a corner as the ball bounced off a couple of Blasters’ players before coming to Mehtab Singh. The defender put his boot through the ball and smashed it into the back of the net.

Ten minutes later, poor defending from Marko Leskovic allowed Diaz to go one-on-one with the keeper. The Argentine kept his composure before scoring against his former club as the visitors doubled their advantage. The goal came a minute after Mongil had denied Lallianzuala Chhangte with a brilliant last-ditch tackle.

The Mumbai City FC defence thwarted quite a few attempts by the Blasters. Sahal Abdul Samad’s strike from a tight angle was saved comfortably by Phurba Lachenpa before Rahul KP’s tame volley went wide in the 33rd minute. Three minutes later, a powerful swerving  free-kick effort from Adrian Luna was parried to safety by Lachenpa.

Kerala Blasters kicked it up a notch in the second half. The hosts managed to push the Islanders inside their own half as the Mumbai City defence faced a barrage of Blasters attacks. Dimitrios Diamantakos’ low shot was palmed away by the keeper before Jeakson Singh’s header from the resulting corner was inches wide in the 57th minute.

As the game inched towards the final quarter, Luna’s effort from inside the box hit the post before landing at the feet of Jessel Carneiro. The full-back adjusted his footing and played the ball across goal to Rahul KP, who headed it wide. The Blasters pushed Mumbai City into their own half but failed to apply the final touch in the 18-yard box.

The win keeps the Islanders’ unbeaten streak intact as they go second on the table with two wins and two draws after four games in the Hero ISL. They are one point behind leaders Odisha FC, and their next match will be at home against ATK Mohun Bagan FC on 6th November, Sunday. The woes are piling up for the Blasters as they stay 9th with just one win in four games. They will make the long trip to Guwahati to face NorthEast United FC on 5th November, Saturday.

Also Read: Sekar sinks Bengaluru FC as Odisha FC pick up third win of the season and go top of the table