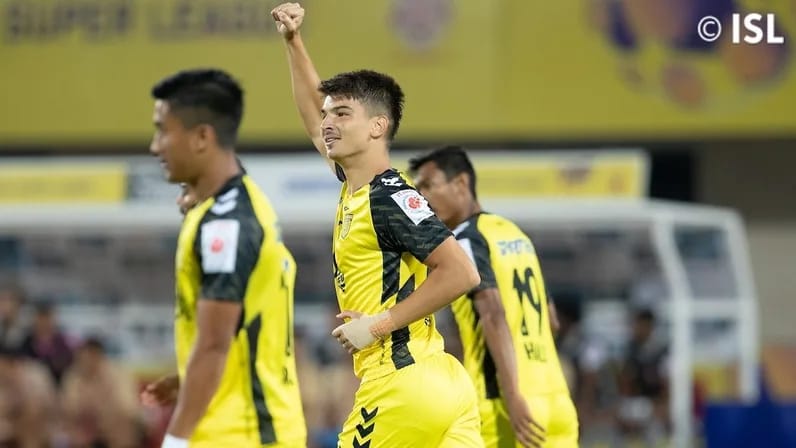 Hyderabad FC retained their place at the top of the Hero Indian Super League (ISL) table after a 1-0 victory over FC Goa at the G.M.C. Balayogi Athletic Stadium in Hyderabad today.

Javier Siverio (‘10) scored the only goal of the game, whereas FC Goa’s Alvaro Vazquez, who had come on as a substitute, missed a great chance to get an equalizer after sending his penalty wide in the 83rd minute.

Both sides were heading into this game unbeaten in the season. FC Goa had a 100% win record after two games, and Hyderabad FC had collected seven points after three games.

Hyderabad FC were unchanged from last week’s win over Bengaluru FC. FC Goa, on the other hand, made two changes – Ayush Chhetri and goalkeeper Arshdeep Singh were included in the starting XI, with Glan Martins and Dheeraj Moirangthem dropped to the bench.

Hyderabad FC took the lead in the 10th minute. A throw-in directed towards Bartholomew Ogbeche’s head from the left flank was flicked by the Nigerian onto the path of an onrushing Javier Siverio, who made no mistake with his finish, expertly placing the ball into the bottom left corner with his left foot.

FC Goa had most of the possession in the first half, and were extremely patient in the build-up, trying to get the Hyderabad FC forwards to commit to the press and play through them, but the Hyderabad FC defense disrupted most moves before the away team could enter the final third.

Half-time ended with Hyderabad FC taking a 1-0 lead. FC Goa head coach Carlos Pena made a double switch before heading into the second half. Marc Hernandez and Redeem Tlang made way for Mohamed Fares Arnaout and Makan Chothe.

The second half started with both sides showing greater urgency. Hyderabad FC were more aggressive, attempting to put FC Goa on the backfoot by overloading the flanks. FC Goa were also less patient in their build-up, looking to play the ball in behind more often.

Noah Sadaoui was found clear on goal four minutes later for FC Goa, but some good work from Kattimani once again, who was quick off his line, forced the Morrocan to delay his shot, and take it from a difficult angle.

FC Goa made another double switch later in the half. Noah Sadaoui and Brandon Fernandes made way for Alvaro Vazquez and Brison Fernandes.

Hyderabad FC were the better side for the next 10 minutes, getting into the final third with more ease, but were unable to fashion some clear goalscoring opportunities.

Not long after, FC Goa were given a penalty against the run of play. Akash Mishra went flying into the path of Alvaro Vazquez in the box. Vazquez took it upon himself to take the penalty, but his shot went wide.

The game was quite frenetic for the next couple of minutes. Six minutes of added time were signaled, during which Edu Bedia had a chance to equalize in the 95th minute after being found on the far post, but Laxmikant Kattimani denied him with a brilliant save. The match ended 1-0 to Hyderabad FC.

Hyderabad FC are now with 10 points from four games and will be playing their third straight home game next week against Odisha FC. FC Goa are now placed fourth on the table with six points after three games. They host Jamshedpur FC at home on November 3.

Also Read: Sekar sinks Bengaluru FC as Odisha FC picks up third win of the season and goes top of the table