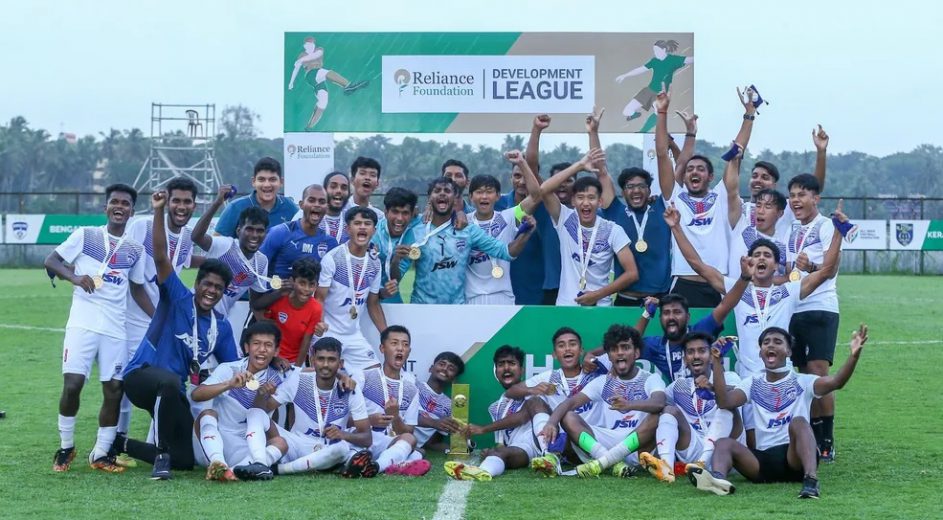 A goalless draw in the title-decider against Kerala Blasters FC meant Bengaluru FC were crowned champions of the inaugural edition of the Reliance Foundation Development League (RFDL), but the result proved to be a fair reflection of how evenly matched both teams were. Both teams will now represent India in the NextGen Cup to take place in the UK later this year.

Bengaluru had to avoid defeat against Kerala to clinch the crown, and over 90 minutes at the packed Benaulim Ground here, the Blues managed to hold their rivals who finished with 16 points from their seven games. Bengaluru ended their campaign as the only unbeaten side in the RFDL with 19 points.

“I would like to thank Reliance for this wonderful platform. All the teams were very competitive. This tournament really helped us get some competitive games for us to understand the level of the players. It’s also a good platform for even the coaches,” Bengaluru FC coach Naushad Moosa said after the game.

Bengaluru skipper Namgyal Bhutia said: “This is our first trophy after two years. I am very happy for the team. This tournament has helped us develop as a unit. We are very excited to qualify for the NextGen Cup. We will try to do well there also.”

“We played very well, dominated the opponent, and created a lot of chances. We were the best team and we had the best players. Bengaluru are a good team too,” said the Polish coach.

“Tournaments like these help in getting more game time for the players.” The game got off to a cagey start with both teams keeping possession for large parts.

Mohammed Aimen came closest to scoring early on for Kerala, his shot coming off the post after goalkeeper Sharon had made a good stop.

Damaitphang Lyngdoh had Bengaluru’s best chance in the first half, but his attempt from the edge of the box following a counter-attack came off the crossbar.

Jagdeep Singh was Blues’ saviour in the second period, clearing Aimen’s effort off the line after Vincy Barretto had skipped past substitute goalkeeper Dipesh Chauhan to set up the striker.

Bengaluru striker Rahul Raju, with seven goals to his name, won the Golden Boot award for scoring the most number of goals while midfielder Bekey Oram was handed the Golden Ball award for being the player of the tournament. Kerala’s Sachin Suresh won the Golden Glove for his exploits under the bar, keeping six clean sheets.

Also Read: Indian Arrows look to get back to winning ways against Mata Rukmani FC