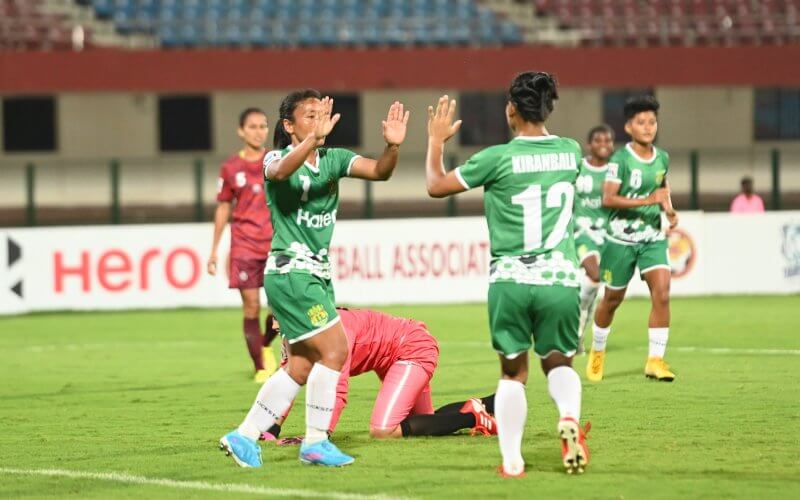 Kickstart maintain their winning momentum after defeating SSB Women FC 0-1 on Friday, May 6, 2022, in the Hero Indian Women’s League at the Kalinga Stadium in Bhubaneswar.

A Prameshwori Irom strike on the 34th minute was enough for Kickstart FC, as they remained third on the Hero IWL table.

The game started with end-to-end football, as both sides kept creating chances. But as the match progressed Kickstart turned out to be the more offensive side.

Kickstart created wave after wave of attacks but were yet to break the deadlock till the half an hour mark. The SSB side showed a great defensive character doing well to keep their opponents at bay.

Finally, in the 34th minute, Kickstart broke the deadlock. Babysana Devi sent in a cross that was equally contested by both Prameshwori and SSB goalkeeper Manju. While both slid in towards the ball, Prameshowri managed to get to it a fraction of a second earlier and slipped it under the SSB keeper, to put her side in the lead.

After the breather, Sandhya Kashyap came up with some good chances for SSB but failed to find the net.

The side from West Bengal looked determined and mounted a number of attacks in the second half, in their search for an equaliser. However, some brilliant goalkeeping from Linthoingambi Devi, and some last ditch tackles from Hero of the Match Sweety Devi kept SSB out.

After this second consecutive loss, SSB remain 6th on the Hero IWL table, whereas Kickstart maintain their position on third with 15 points from 6 matches.