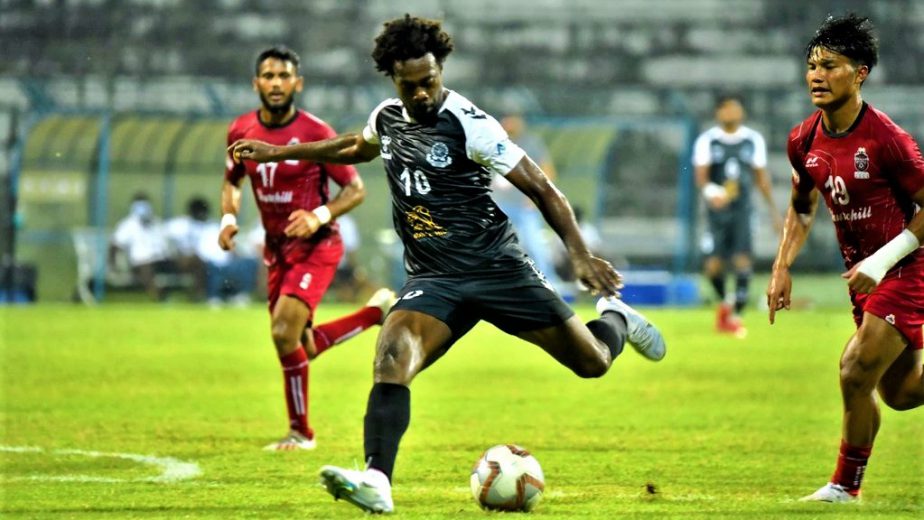 The clash which was expected to be balanced was extremely one-sided in the first half. Mohammedan dominated the first half as the defence was on top for Churchill Brothers Brothers. Three minutes in, defender Asheer Akhtar tried his luck from range but that did not bother Shilton Paul in Churchill Brothers’s goal. Akhtar came close again, this time from a Nikola Stojanovic corner as his header glanced wide.

Pressed in their own half, Churchill Brothers could not even break on the counter and were left to defend with everything they had. Momo Cisse was at the heart of the defence that kept Mohammedan hungry attackers at bay. Cisse slid in with a great block to deny Wayne Vaz’s strike after the ball came to the defender eventually after an Andelo Rudovic freekick from the edge of the box.

Churchill Brothers had finished the half with just two off-target shots. One coming from Komron Tursunov, after the striker chose to shoot instead of pass and the other from Shubert Pereira, who went for goal from outside the box after a rare spell of possession from Churchill Brothers. Apart from the two opportunities, Churchill Brothers were on the back-foot, denying Mohammedan an opening goal.

Five minutes past the half hour mark, Marcus Joseph was found on the left with a sublime ball from Rudovic. Joseph’s first touch was perfect but the execution that followed was poor as the shot was tame and comfortable for Paul to collect. Joseph tried his luck again, just a few minutes later. This time the Trinidadian tried to catch Paul off the line by attempting a long-range strike almost from the half-line. Paul was concerned before the ball went flying over the bar.

In the final good chance of the half, Stojanovic lifted the ball over the Churchill Brothers defence and found Rudovic. The Montenegrin slotted the ball home but saw the offside flag go up.

Nine minutes into the second half, the pressure paid off for the Black and White Brigade as their leading goalscorer Joseph buried the ball into the back of the net with a thumping header. Stojanovic was at the heart of the move again as the Serbian picked Brandon Vanlalremdika on the right flank with a good ball. From the right, Brandon played an excellent cross into the box as Joseph was on the end of it to bag his fourteenth goal of the season.

Mohammedan had a chance to double their advantage when Joseph was brought down right on the edge of the box by Suresh Meitei. Stojanovic took the set-piece and smashed the ball low and hard. The initial effort was blocked by the defence and the rebound also came off a defender and went out for a corner.

Past the hour mark, Churchill Brothers finally started moving out of their own half in search of an equaliser. The introduction of Gnohere Krizo along with Quan Gomes and Saurav Mandal made the difference as Churchill Brothers marched forward.

Krizo got near the box and tried to beat Zothanmawia from the edge of the box but could not keep his effort on target. The Ivorian tried again after two minutes, this time wriggling in from the left but his shot was high again.

Kapil Hoble was next to bother the Mohammedan defence. His run into the box was difficult to stop as he went past his marker. However, the shot that followed was off target again. On the counter, Mohammedan substitute Faisal Ali went on promising run down the right. The second touch of the winger let him down as his effort was dealt with by Paul.

Ten minutes from time, the Red Machines were reduced to ten as Tursunov was shown a straight red. Safiul Rahaman pushed Tursunov in an effort to get the ball. The Tajikistani striker was not happy with the challenge and lashed out at the Mohammedan defender and went down.

In the last minute of stoppage time, Mohammedan finally doubled their lead. Ali came running down the right side but could not place the ball past Paul. An excellent block denied the winger but the rebound fell to Joseph, who took a couple of touches before adding another goal to his tally.

After a crucial win for Mohammedan, the gap to Gokulam is down to three points. However, Gokulam have a game in hand. As for Churchill Brothers, their nine-game unbeaten run came to an end as they are now seven points behind Mohammedan SC.

Prameshwori strike seals 3 points for Kickstart against SSB
A new Narzary on the block: Apurna shines for Indian Arrows