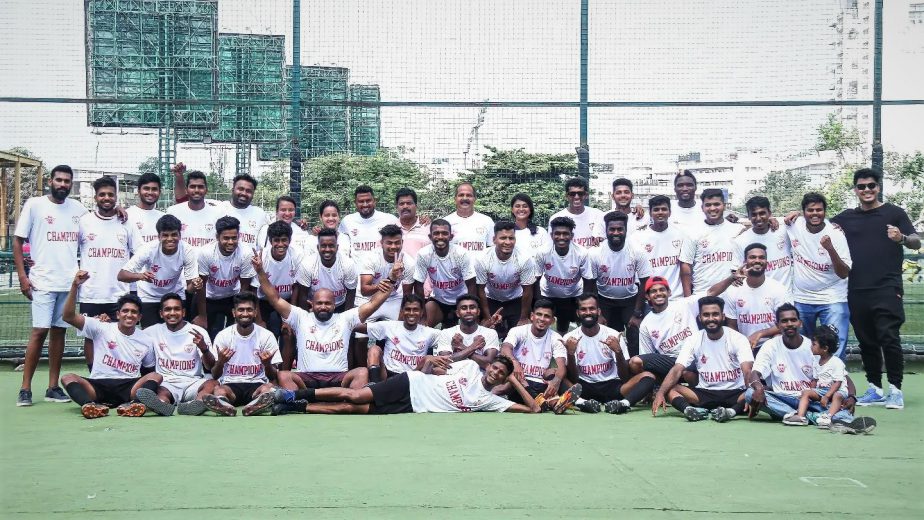 Ambernath United Atlanta FC achieved something truly spectacular. They not only won the MFA Elite Premier League title in their debut season but also went unbeaten throughout the league campaign, notably winning all matches.

The new champions of Mumbai lifted the silverware under the guidance of former India international Steven Dias. An attacking midfielder during his playing days, Steven addressed the team as the “perfect team”.

Over the course of the season, the team has consistently improved itself match by match. The club began their campaign in late March with a narrow 1–0 win over Iron Born FC and scored 76 more goals in the next 16 matches and conceded just 5 living up to Steven’s tag of “perfect team”.

On the squad’s adaptation to his philosophy of football, he expressed, “Initially when I explained to our owner about my playing style, he liked it and we built a team that could execute it. After getting together, initially, we had a discussion and the players liked my approach. From then on they worked hard and never looked back.”

Mr. Dias is happy that he had such a dominant team like this at his disposal and he loved the way the team performed. He further added, “We had around 30 players in our team and all were equally good. Sometimes I faced difficulties in picking the starting 11 for a match. I think when the coach feels this kind of difficulty, it means the team is performing well. The squad worked hard in the training sessions and did well in matches. I am very happy to have a team like this.”

“Attack is the best defense”, Ambernath United Atlanta FC proved it to perfection. Over the course of the season, they scored 77 goals and the majority of them were scored by Alister Anthony and Arif Shaikh who were the league’s top 2 goal scorers as well with 21 and 18 goals respectively. The league’s top scorer – Alister thanked his teammates for helping him in scoring lots of goals, “Every single one of my teammates showed their faith in me and helped me both on and off-field. They were the ones who inspired me to perform at my best”, he said.

He further added, “It’s a great feeling to be the league’s top scorer. It’s a big deal for me and I’m very happy that my goals helped the team a lot to win.”

Apart from performance on the pitch, solidarity has helped the team perform better in every match, feels senior figure Aaron Dcosta. “This is one of the best squads Mumbai football could ever get to witness. Because we all treat each other like family, our bond with each other is strong and we helped and inspired each other to do better. The entire team was totally motivated as everyone knew that we are going to create history by winning 17 matches in 17 matches”, he averred.

Other than the regular goalscorers, there was one particular player on whom the team was heavily dependent – Shravan Shetty. The full-back was instrumental in both defense and attack for the champions. He was the only player to start all 17 matches for the club. He was a crucial part of the back four that kept 12 clean sheets. He was involved in 13 goals, scoring 6, and assisting 7. For this tremendous contribution, he was chosen as the player of the league for the club.

“The feeling is great and special. For me the whole team was fantastic. We would always pat each other’s backs on and off the field. I am grateful to Coach Steven Bhai and the management for this special season and we are focused on what’s coming next. The club is very professional, committed to the future of the players, and focused on the next big challenges; that’s what makes this team different from others.”, said Shravan.

Ambernath United Atalanta FC is a joint entity of Ambernath United and Atlanta Football Club. Atlanta FC was formed in 2011 and played in the third division in the early years and gradually moved up. As Ambernath United were looking for a way to enter the MFA’s Premier Division, Atlanta FC extended a helping hand. Both the clubs joined hands to form a formidable outfit in Ambernath Utd – Atlanta FC, which would go on to win the title without dropping a single point.

Allen Contractor was the mastermind behind the setup of Atlanta FC. Allen believes that AUA FC has unity and also has a purely professional atmosphere. “I love the unity in the club, everyone is so professional. From the management to the players, everyone knows their roles and responsibilities. The players knew what we expected of them and they consistently performed well. It is not easy to win 17 matches consecutively in these hot and humid conditions. It has been an invincible season for me and we are really happy with the result.”

On plans ahead, he said, “Moving forward we plan to give our best in the I-League Second Division. I always believe in thinking one step ahead. While the I-League is our ultimate dream, we are now more focused on short-term goals and moving forward. This has been our mentality since the inception of Atlanta FC in 2011. I am a winner and I want to do the same in the I-League 2nd Division.”

“The immediate plan is to get better at scouting and unearth hidden talents in Mumbai and give them the exposure they really need. We want to be a platform that has been missing from Mumbai for a long time”, he added.

All this could not have been possible without the visionary owner Mr. Deepu K. A former footballer himself, his passion and love for the game drive him to achieve more.

“The feeling of winning the title in our debut season is truly unimaginable. When Steven told me he’d stand by me, I was sure we’d do something great. When we assembled the squad, my confidence increased further. The players we signed were all the best players from Mumbai. As a new club, it’s difficult to sell the project to the best players and sign them. I am really happy that the players we have signed understood our vision and gave their all. After winning 3 matches in a row, I was confident about the team’s potential, and after 7 consecutive wins, I thought yes, we can win the league. We won the league title 4 matches before the completion of the league. That’s when we had to keep motivating the players. The players stayed grounded and in the end, we made history by winning the league title without a single loss”, stated the jubilant owner.

He further added, “One of the big things we achieved was that our performances brought the fans back. During my playing days in the 90s, there used to be a huge following for football among the people. The grounds were crowded and the atmosphere used to be electric. People’s constant encouragement throughout the campaign has boosted our confidence this season. The number of supporters we had for the afternoon matches in the hot and humid conditions of Mumbai shows how passionate the people of the city are about football.”

“I am really grateful to Allen and Aditya for standing by me and Steven. I thank our assistant coaches Vimal and Ankit, our goalkeeping coaches Adil and Mr. Manoj Nair, our physio Pooja Bhowad and, support staff Sujit Pawar for taking care of the boys and keeping them motivated”, concluded Mr. Deepu.

After a stellar season, Ambernath United Atlanta FC is certainly planning the life ahead and is committed to a bigger and more challenging future. With its majority of players from Mumbai under the guidance of Mr. Dias and led by Mr. Dipu K & Co., the club could be a big deal in Mumbai football in the years to come.