On a ‘mission’ for a successful Asian Cup, Indian Women’s Team set for first match under Thomas Dennerby 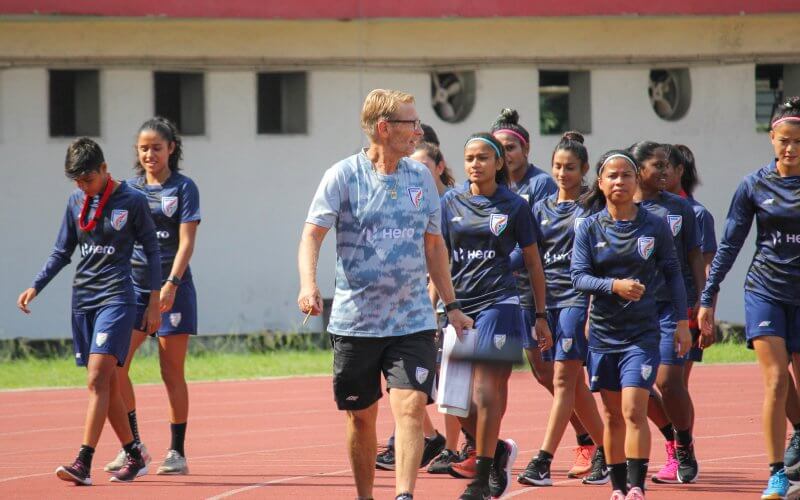 With around four months to go for the AFC Women’s Asian Cup, the Indian Women’s Team is hard at work, first in Jamshedpur, and now in Dubai, UAE, training under new head coach Thomas Dennerby, as they prepare for their upcoming friendly against the UAE Women’s Team on Saturday, October 2, 2021.

The Indian Women’s Team will be playing two friendlies against the UAE National Team, and the Tunisian National Team. The team spent a month in Jamshedpur where they trained with infrastructural and logistical help from the Government of Jharkhand, going through 12 rigorous sessions a week.

Dennerby, who took over the reins of the Senior Women’s National Team earlier this year, comes with a vast experience of having coached the Swedish Women’s Team to the Olympic Final and the Nigerian Women’s Team to the African Women’s Cup of Nations title in the past. Having taken charge of the Indian Women’s Team, Dennerby is hopeful that a good run for India in the Women’s Asian Cup will go a long way in popularising women’s football in the country.

“The mission is to have a successful tournament when we go into the AFC Women’s Asian Cup next year. So we are putting a lot of effort into all the sessions we are doing now. We do five technical and tactical sessions, we do running sessions, we also play friendly games against local sides. We are training hard for the Asian Cup next year,” Dennerby said in a candid chat with www.the-aiff.com on the eve of his side’s first friendly against UAE.

“Back in my home in Sweden, women’s football is huge. In Nigeria, where I’ve also coached, football is like a religion. But here in India, the popularity is perhaps not as much as that. But that is also one of the exciting parts about the job for me,” he beamed. “If we have a successful tournament, it could be huge for India. And if you look at the game, in terms of the physical and tactical parts, I must say that we have a lot of players that can play at a very high level.”

The UEFA Pro License coach brings his own philosophy about the beautiful game into the team, and it is one where the whole squad strives to strike the perfect balance in their harmony on the pitch.

“My philosophy is simple. When it comes to defending, our team has to be organised. Every player has to know exactly what they need to do. We want the team to be compact and we are working on that. And then we also want to this compact team to win the ball back, and when we do that, of course, sometimes we want to counter attack quickly, and sometimes we want to slow it down and play around with the ball,” he explained.

We have come to Hero I-League Qualifiers with the intention to earn promotion: Kenkre FC coach Akhil Kothari
Edu Bedia: We want to win every trophy