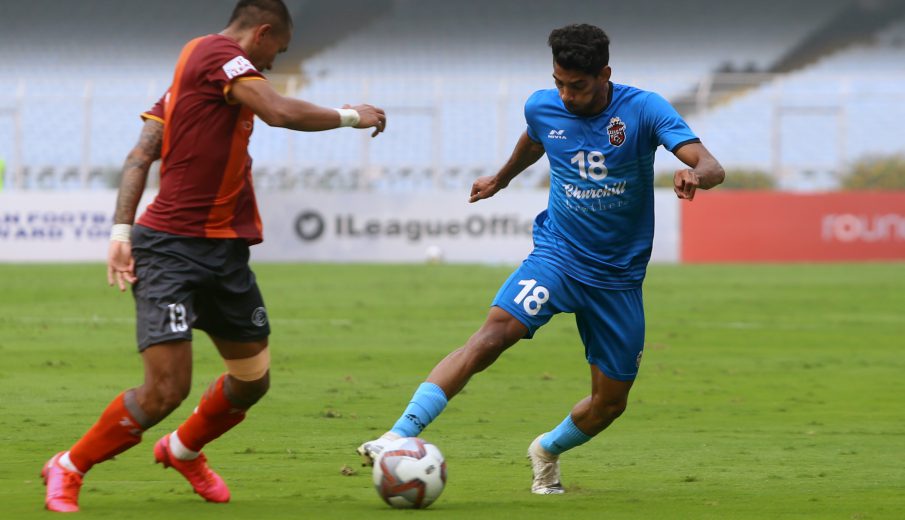 Bryce Miranda is the lone Mumbaikar named in the 28 member probables for the Indian U-23 National Team for the AFC U-23 Asian Cup 2022 Qualifiers.

Amidst the global pandemic that has halted Mumbai’s Football activities over the last 18 months, city Boy Bryce Miranda has gone from playing locally at MFA Elite Division to playing in I League to now getting selected for India U23, a sign for Mumbai Footballers that the road may seem hard but not impossible.

“I had heard rumours about my selection but on the 22nd afternoon I was sleeping in the room when my friend called me to congratulate and I saw my name there it was posted on Instagram and it was official. It was exactly just one day before my birthday and it is one of the biggest birthday gifts I could ever get.” said an excited Bryce, who celebrated his 22nd birthday just a day later on September 23.

Currently, in Goa for preseason with Churchill Brothers, Bryce further adds about the reaction back home, “My family is very happy at the moment especially my mom who’s been backing me since day one when I told her I’m called up for the national team she was so happy that she burst into tears. My teammates and my coaches too called me that afternoon to wish me. I feel so blessed to receive so much love and support, all I want to do now is to keep making them proud.”

“He is super talented and deserving to be there. His hardwork, dedication and determination to be there gave him this success”

The Journey so far

Having started his career in the youth setup of the then I league side Mumbai FC, Bryce had to switch to playing for Elite Division side – Union Bank of India, after the Mumbai club got shut down post the 2016-17 season. Although the Institutional side like UBI could not play in the I league, Bryce went on to win around 8 All India ‘Titles’ with the club. His impressive performance with UBI didn’t go unnoticed as he earned a trial with FC Goa Developmental side in 2018.

Although his stint at the Gaurs developmental side was short-lived it still turned out to be a good learning experience for him. “At Goa, I learned more about football in different aspects. This was the time I improved my skills and speed. It was a short time there but it was amazing” Bryce had mentioned in an interview.

On returning from Goa, a much improved Bryce signed for Income Tax, another institutional side that play in MFA Elite Division side. But the 2019-20 season saw Bryce come to his full form as the winger played an instrumental role for Income Tax‘s impressive campaign, where the club reached the 2nd spot in the league table before the Covid Pandemic halted the final leg of the tournament.

In the nine games that were played, Bryce Miranda registered a total of 10 assists to top the assists chart aside from scoring 3 goals. His pinpoint crosses from the wings were one of the highlights of Income Tax’s gameplay, as the club ended up scoring the most number of goals in the season. Bryce’s good performance finally paid off with the youngster bagging an I league contract from the Goan giants – Churchill Brothers.

Bryce’s first year in I League has been an eventful one as the 22-year-old played a significant part in his club’s excellent campaign. Although Churchill missed the title by a whisker, Bryce was a regular starter in the squad and contributed with 3 assists and a goal. His good performance has finally opened the doors for India U23 squad.

Talking about his trial days with  Churchill Brothers, Bryce mentioned his former coach’s advice, “Last year when I was heading to Churchill Brothers for a trial my former coach Alex Ambrose had told me that if I do well and perform in the I-league, I can get a chance to play in the national team.”

Further adding on his selection to U23 and what it means to him, “I have a dream to play for my country one day and now that I am almost there I want to do my best and go all out so I can make my country and my people proud of me. This is just the start for me and so I’m just going to keep my head down and keep working hard like always”

Bryce may not have been made it to the senior national team but his selection to U23 probable’s will bodes well for the dreams of Mumbai Footballers who aspire to play for India but have doubts over the path ahead. Mumbai has just one representation in the top 2 leagues of the country. With no I league club in the city and road to ISL outfit Mumbai City FC a bit tricky for local footballers, the path taken by Bryce to make it to the national level should serve as an inspiration.