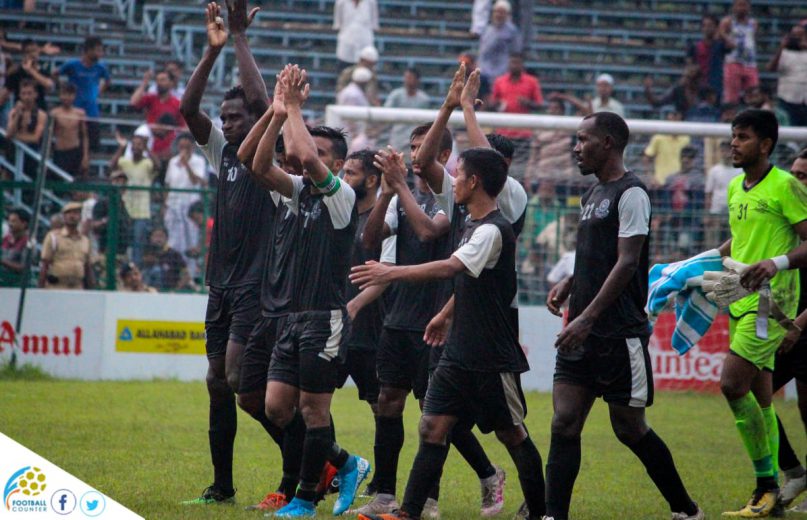 10th August 2019, Mohun Bagan Ground, Kolkata: Today’s encounter saw the Kolkata heavyweights, Mohammedan SC play against the Indian Navy. It was a must-win match for Mohammedan and they emerged triumphant with a huge scoreline.

The match kicked-off with Indian Navy pressurizing the opposition. Within the first 30 minutes, the Indian Navy launched several attacks and were very close from scoring. Mohammedan’s defender, Kareem Omolaja Nurain went on to make two crucial goal-line saves hit by Sarbjit Singh of Indian Navy. Overall, the Mohammedan SC defence stood robust throughout the first 45 minutes of the game.

As the second half kicked off, the Indian Navy pushed harder and tried to capitalize on the many chances they created. However, Mohammedan SC went on to draw the first blood. Arthur Kousassi, the match hero, who went on to score 5 goals later today, broke the deadlock and gave Mohammedan the much-needed lead to stay afloat. At the 61st minute, Mudde Musa increased the lead for the team. The score displayed 2-0 in favour of Mohammedan Sporting Club.

The Indian Navy didn’t seem to be done for the day. They bounced back at the 71st minute. A stunning long-range effort from Britto PM saw the ball travelling into the net. Scoreline displayed 2-1. Till the time Indian Navy could have settled after their breakthrough, the Mohammedan striker Arthur Kouassi completed his brace. He further completed his Hat-trick at the 76th minute and scored again from a penalty at the 84th minute. His 5th and the last goal for the day came at the 90th minute. It seems, Arthur might have broken all the individual goal-scoring records in the Calcutta maidan and the Durand Cup history today.

A fine Indian Navy outfit, who had a good start to the match scored a consolation goal. Britto completed his brace at the dying minutes. The match ended in a gigantic 6-2 scoreline in Mohammedan SC favour.

Mohammedan next face ATK on the 16th of August at the VYBK Stadium and Indian Navy will lock horns against Mohun Bagan on 17th August at the same venue.