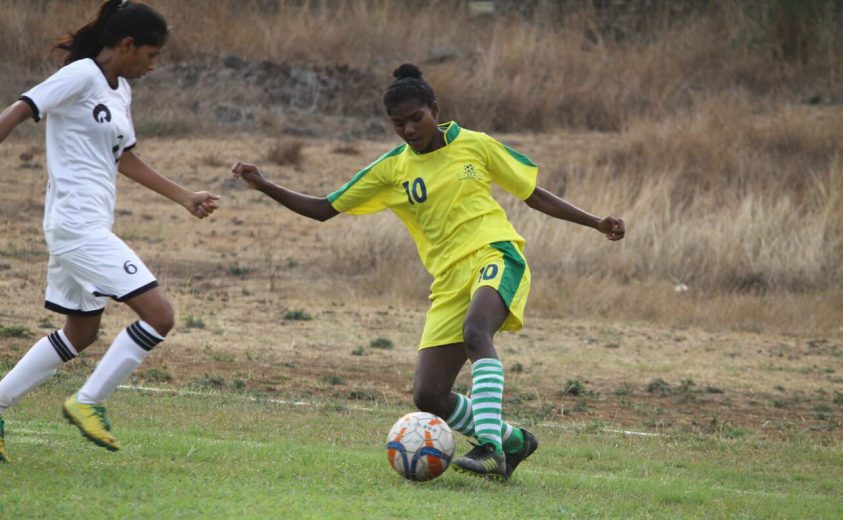 The final of the Hero Junior Girls’ NFC 2019-20 will see Jharkhand take on Himachal Pradesh after both sides recorded victories against Gujarat and Haryana respectively in the semifinals on Monday (April 29, 2019) at the Polo Ground in Kolhapur, Maharashtra.

Jharkhand made their way into the final with a routine win against Gujarat, thanks to three strikes in the first half. Sumati Kumari, who already had 15 goals in three games so far, registered her 16th of the competition in the sixth minute of the game after a cross by her from the left flank flew straight into the net.

Just three minutes later, Jharkhand doubled their lead with a delightful goal by Sumati as the striker showed incredible guile to place a low cross from the right flank into the bottom corner with her first touch – leaving the keeper with no chance.

Buoyed by the early advantage, Jharkhand continued to dominate proceedings but the Gujarat defence stood its ground well and denied any clear goal-scoring opportunities. However, in the second minute of added time at the first half, the scoreline was extended by Jharkhand – with Sumati claiming an assist ths time around.

She danced her way into the penalty area and got past two defenders as she raced through on goal. Approaching the keeper, she squared the ball to onrushing midfielder Astam Oraon, who comfortably tapped it home.

Jharkhand continued to have a grip of the game in the second half but did not add to the scoreline. Their best chance fell to Salomi Minj at the hour-mark but her header from the six-yard line was straight at the keeper. With 10 minutes to play, Astam was inches away from finding the net with a shot from distance but her effort went wide as the game ended 3-0.

The first half between the two northern neighbours ended goalless with Himachal Pradesh starting off as the better side and testing Haryana goalkeeper Anshika from long range multiple times in the first ten minutes. Their best chance came in the 13th minute through striker Manisha but her shot was just wide.

Haryana looked to hit on the counter and through set pieces, and midway through the first half, they almost got the opening goal after a free-kick from the left flank led to a goalmouth scramble which was cleared away at the last moment by the Himachal defence.

After the break, the match became an end-to-end affair immediately and Manisha had a golden chance to score in the first attack of the half but her shot on the run was off target. In the 58th minute, Haryana’s Raveena had a shot saved by Himachal keeper Manisha and 12 minutes later, Rajni Bala’s shot hit the side netting.

The match looked to be heading into extra time but in the third minute of stoppage time, the deadlock was finally broken through Himachal’s Poonam. Making an interception in midfield, she made her way into the box after beating a couple of defenders and headed the ball past the keeper to secure a 1-0 win for her side and ensure a spot in the final.

The final will be held between Jharkhand and Himachal Pradesh at the Polo Ground on Wednesday (May 1, 2019).