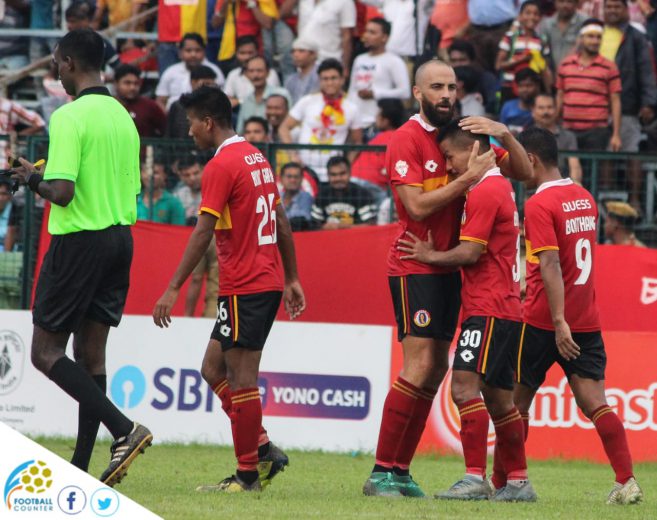 Quess East Bengal thumped the young Jamshedpur side by a gigantic 6-0 margin.

Since the commencement of the game, East Bengal were class apart. The spanish striker Jaime Santos Colado opened the scoring sheet at the 6th minute of the match from a penalty. He completed his brace within the next 2 minutes and was subbed immediately, so that he gets enough time to recover for the upcoming match. As it happened, East Bengal were in no mood to stop. Pintu Mahata scored his first goal in the Durand Cup at the 32nd minute. The first half concluded with East Bengal thoroughly dominating the ISL outfit and leading by 3 margin.

Nothing changed at the second half. Although Jamshedpur tried to launch some attacks in the opposite half. However,  they failed to challenge the robust East Bengal defence.

East Bengal further went on to thump the young side by scoring at the 74th, 79th and 90th minute. K Bidyashagar Singh had a brace and the final cherry on top of the cake was gifted by Haokip at the dying minute of the match.

This is a huge set back for the young side. The ISL outfit will surely look forward to correct their shortcomings on their upcoming clash against the Army Reds on 9th August at the Kalyani Stadium. East Bengal will lock horns against the ISL champions, Bengaluru FC on 14th of August at the VYBK Stadium, Kolkata.