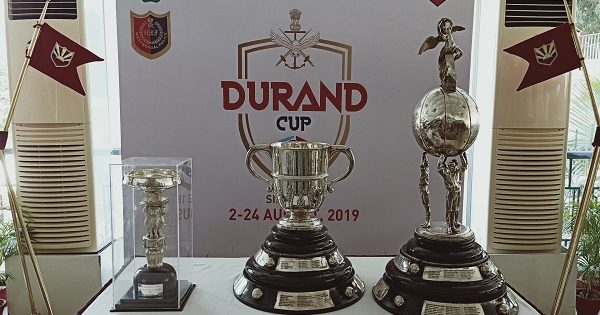 Durand Cup was the most prestigious and sought after football tournament in the Indian soil until the late twentieth century.

Today, we go back in time when football in India was the voice of the nation. Football was not a glamorous affair, neither did the beautiful sport have any signs of fortune. However, money and fame never mattered to the players and the supporters. The passion and the enthusiasm of the Indian crowd were enough to continue the sport. It was commendable due to vivid reasons. Some reasons being that football has been a medium of pre-independence battle. The game has been a channel of community bonding and it has been a medium of happiness and glory amongst the countrymen.

Durand Cup was the most prestigious tournament in the Indian soil until the late twentieth century. The tournament began in 1888. It is the oldest tournament in Asia and the third-oldest in the world. Initially, the tournament was designed to be played by the British troops and the army. But over the years, the civilian teams started taking part in the grand competition. The first Indian club to get an invitation to participate in the Durand were the national club of India, Mohun Bagan in 1922.

From its inception until 1972, the Durand Cup was a knockout tournament. The rules changed in 1973. The committee introduced a unique concept of having some seeded teams and some qualified teams from the knockout rounds. They then went on to play against each other in the Quarter Final league, followed by a knockout Semi-Final and Final. A fun-fact being, there were no penalty shootouts until 1971. Usually, teams who drew had replays. But the rule changed in 1971. However, sometimes the previous replay rule still existed. Earlier, the Durand and all the other tournaments in India had the rule of 2 points per win.  In 1995, the Durand adopted the formal rule of three points for winning a game as per the FIFA rulebook.

The Durand is the only tournament in which the winners get three trophies – the Durand Cup, the Viceroy’s Trophy and the Shimla Trophy. In India, for about four decades, till the end of the 1980s, the power and mightiness of a club were determined by the number of Durand titles. The Kolkata teams have the best record in the continent’s first tournament. Mohun Bagan bagged the Durand title 16 times and were the runners up 11 times. Bagan also holds a record of winning the title thrice in a row for two times in 1963-65 and 1984-86. On the other hand, the arch-rivals of the national club, East Bengal, are no behind. They too have a laudable 16 title win and 10-time runners up cap. They did a hat-trick of triumphs during 1989-91.

1940: The chain-breaker – For the first time in Indian football history…

Well, the two renowned Calcutta giants are not the only praiseworthy sides to have cherishable memories in the Durand. There’s another team amongst the many Calcutta Maidan tents who don the prestigious black and white striped jersey – Mohammedan Sporting Club. They were the first Indian team to take home the coveted title.

The Durand Cup was not held during the first World War (1914-1919). For the initial forty-five years, various English regimental teams dominated the tournament. Before 1940, there were only two exceptional moments when the Indian civilian team had a remarkable performance.

In 1927, the East India Railways were the first team to reach the finals of the knockout tournament. Aided by robust players, the team fought boldly before losing by a scoreline of 2-0 against York and Lancaster Regiment. After 9 years, again the Indian spark was rejuvenated by the Aryans. In 1936, the Calcutta based outfit faced the English Green Howards Regiment in the Semi-Finals. In an exuberant match with end-to-end offerings, the barefooted Aryans faced unjust. During the dying moments of the match, the Aryans gained a penalty kick. After cancelling the two attempts at goal which went past the British keeper, the third attempt was also ruled out.  The British referee did this for no apparent reason. The crowd outraged and invaded the field to show their protest. The match got cancelled and the Aryans left Shimla the next day.

After these two noteworthy moments, the British monopoly was thrashed for the first time by the Calcutta based Mohammedan SC. The 1940 Durand Cup took place in Delhi for the first time. On their way to glory, in the first round, Mohammedan SC went on to defeat Collegians Sports Club 5-0, and Hussars 3-0. During the qualifying stages, they conquered Union Club 2-0. Mohammedan conceded their first goal in the Semi-Finals. That too against the powerful Welsh Regiment. Although, they came from behind and defeated the English side by a thumping 3-1 margin.

In 12th December 1940,  for the first time in Indian football history, Mohammedan AC went on to defeat the Royal Warwickshire Regiment to conquer the coveted Durand title. Nearly 50000 people witnessed history at the Irwin Amphitheatre. The team played in a 2-3-5 formation. The historic team consisted the likes of Usman Jaan as the Goalkeeper, Jumma Khan and Bacchi Khan in defence, Noor Mohammed (Jr), Noor Mohamed (Sr) and Abbas Khan in midfield and the furious striking line of Rahim, Rafiq, Hafiz, Saboo and Mehmood.

After that historical feat, Mohammedan reached the final thrice but failed to win the honours. They next won the Durand Cup in September 2013, beating ONGC by a scoreline of 2-1 in the final.

The Durand happened annually by a special society nominated by the SSCB. For three years from 2006-08, the Durand was organized and financed by a sports management company. The Durand got revamped. But the organizations failed to combat the increasing costs. Unfortunately, the historical tournament came at a halt.

After 3 years of its dismissal, the majestic Durand is set to grace the maidans of the City of Joy, Kolkata. Yes, the oldest tournament in Asia and the 3rd oldest in the world enters its 129th edition. This time, consisting of 16 teams from the ISL, I-League, I-League 2nd Division and the Army, Navy & Airforce outfits. The live-action starts tomorrow, 2nd of August 2019, where the mighty Mohun Bagan takes on the significant Mohammedan SC.  The tournament will continue till 24th August 2019. The matches will be played in 5 stadiums in Kolkata and are to be broadcasted on Addatimes and Star Sports!

Guinea match will give us a proper estimation of where we stand: Maymol Rocky
MDFA Elite Division Champions Mumbai Customs to conduct trials