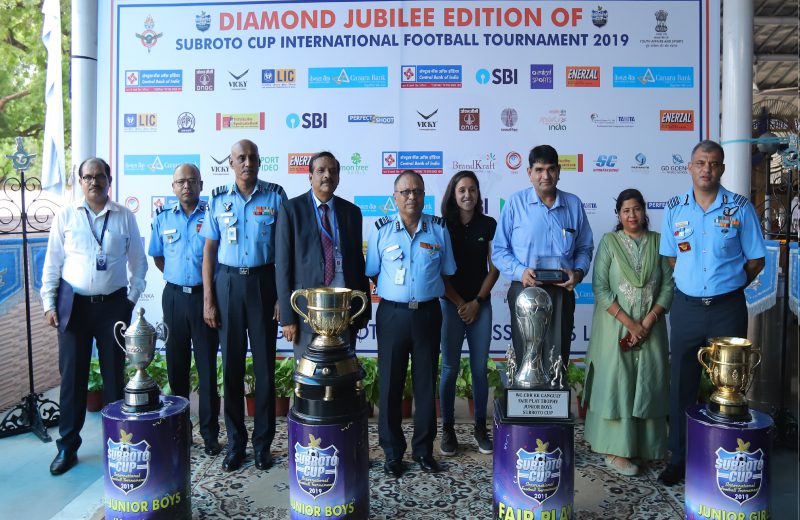 The tournament this year will see a record participation from 112 teams including 16 international teams vying for the coveted winner’s prize in the Sub Junior Boys (U-14), Junior (U-17) Boys & Girls categories.

The Subroto Cup International Football Tournament – Asia’s largest youth football tournament is all set to kick-off in the National Capital from 20th August 2019.

Group Captain Deepak Ahluwalia, Honorary Secretary General announced that as Subroto Mukerjee Sports Education Society celebrating its Diamond Jubilee Edition this year the prize money for the Winners and Runners-up in all three categories have been enhanced by Rs 50,000/- and also for the best player and  best goal keeper increased from Rs 40,000/- to Rs 50,000/-.  Now the winners, apart from Cup, will walk away with an attractive cash prize of INR 3,00,000/- for the Sub Junior boys while a cash prize for INR 4,00,000/- each will be awarded to Junior Boys & Girls. The Runners-up in the Sub Junior Boys category walk away with a cash prize of INR 1,75,000/- while the Winners would be earn a total of INR 2,50,000/-.

The tournament is organized by Subroto Mukerjee Sports Education Society under the aegis of Air Force Sports Control Board and is supported by the Ministry of Youth Affairs and Sports, Ministry of Human Resource Development and the Sports Authority of India. Ambedkar Stadium, New Delhi will play host to the knock out games including the semi-finals and finals while the round robin games will be played at other grounds across Delhi & NCR.

Sharing his thoughts at the function, Air Marshal PP Bapat, said, “It’s a momentous occasion for us to host the 60th Edition of the Subroto Cup. We at the Indian Air Force have always strongly believed in sports as a critical factor to usher in human development and today this needs no emphasis. Football is undoubtedly the world’s favourite sport and the love for it is similar amongst air warriors as well. Hence hosting the tournament for the last 59 years has been a matter of pride for us.”

“With the years, the number of participating teams from India and abroad has seen a steady rise and that only speaks for the popularity of the tournament across the globe. I am happy to be told that the Subroto Cup International Football Tournament this year will also see participation from 16 international teams – the highest ever in the tournament’s history. I wish all the participating teams all the very best and hope to see the best team emerge victorious.” Dalima Chibber, former Captain of the Indian Women’s Senior National Team and a prodigy of Subroto Cup said, “It’s an honour to be present here today. Subroto Cup’s status as a prestigious football tournament needs no further gratification and I feel glad to see that over the years it has only grown in stature and respect. With emphasis on the growth of Indian Football which is on the rise and the U17 Women’s World Cup scheduled next year, it’s very important for us to have tournaments attracting the youth. It’s these platforms which are the breeding ground for future stars and Indian football needs youngsters who can contribute positively to the game. I am sure like in the past, Subroto Cup will help in spotting some bright stars of the future this year as well.”

Champion teams in the U-14 boys, U-17 boys & Girls category from each state and Union Territory of India along with institutional teams, international teams fight it out at the Subroto Cup International Football Tournament for the winners’ prize.

Also Read: “Both the teams are equal to me”: East Bengal winger Pintu Mahata