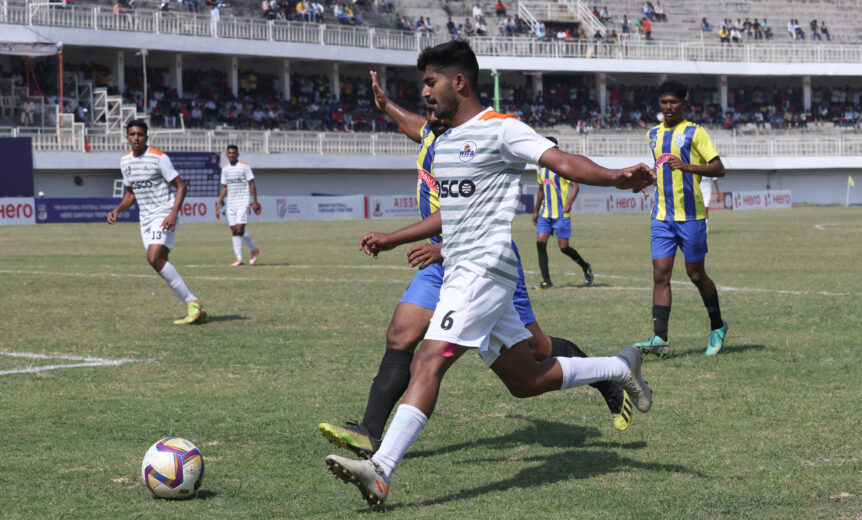 A quick-fire first-half brace from Omkar Patil coupled with goals from Kaustubh Ravindra and Rushikesh Patil helps Maharashtra to their third consecutive victory in their ongoing Santosh Trophy campaign.

Maharashtra started off the match with great attacking intent and came close to breaking the deadlock on a couple of occasions in the first five minutes of the game. In the 8th minute, Ashley Koli was fouled on the left wing, leading to a free kick. Jonson Mathews took the free kick and sent it to the far post where it was headed into the goal by midfielder Omkar Patil, giving Maharashtra the lead.

Just two minutes later, another cross into the box found Ashley Koli on the left, who laid the ball off for Omkar Patil in the center. The midfielder then struck a powerful first-time shot that beat the diving keeper and nestled into the bottom right corner to make the score 2-0 in favor of Maharashtra.

Maharashtra continue their attack and in the 34th minute, Kaustubh played the ball for Sufiyan before making a run into the box. Sufiyan lofted it to Arif, who chested and lobbed it backward for Kaustubh, who then struck a powerful shot on the volley that beat the keeper at the near post to make it 3-0 for Maharashtra.

At halftime, Maharashtra were leading with a comfortable 3-0 scoreline. They were dominant in the first half, having 20 shots on goal, 10 of which were on target.

At the other end, Dadra & Nagar Haveli and Daman & Diu (DNH & DD) rarely troubled the Maharashtra defense. In the 78th minute, a short corner routine saw Johnson take the ball at the edge of the box before striking a curling shot toward the goal. However, what looked like a regulation catch turned into a blunder as the goalkeeper Gnana Prakash spilled the ball from his hands and substitute Rushikesh Patil, who was lurking just behind, tapped the ball into the net to make it 4-0 for Maharashtra.

Deep into injury time, a long cross from the right winger Johnson Mathew found substitute Himanshu Patil at the far post, however, the striker failed to guide his header on target as the game ended with a final score of 4-0 in favor of Maharashtra.

This was the third win for Maharashtra in the group, currently 2nd in the table on goal difference.