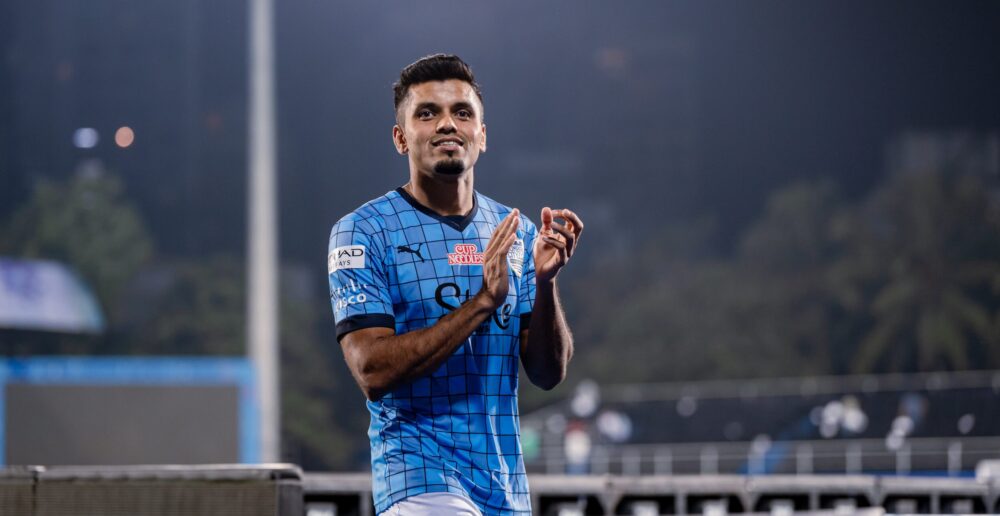 Rahul Bheke shares his thoughts on the Islanders’ undefeated season, staying fit and the impact of Des Buckingham on the squad dynamic

Mumbai, 11th January 2023: Mumbai-born defender and of the most experienced Indian footballers, Rahul Bheke is a leader, both on and off the pitch. He has been instrumental in Mumbai City FC’s successful season.

The Islanders, as they are fondly known, currently sit at the top of the table for the ISL 2022-23 season, where they have enjoyed an undefeated campaign so far, with 33 points in 13 games. In their most recent clash, they secured an authoritative home victory against third-placed Kerala Blasters, winning 4-0 at home.

This season, Bheke has played and led the squad in all thirteen games for the Islanders and he boasts impressive numbers. He has made 20 interceptions, 26 blocks, 37 tackles and 28 clearances and consequently, has been an integral component of the Mumbai City defence, who have only conceded 13 goals this season, less than any other ISL side besides Hyderabad.

Speaking on Mumbai’s immaculate form this season he said, “The players are demanding a lot from each other, continuous improvement is the expectation. Not only on the pitch but in training as well. We have been working hard on sticking to our game style through the 90 minutes. Our performances have been getting us results so it is important for us to stay disciplined and maintain the intensity.”

Mumbai City have been thriving under head coach Des Buckingham with a solid concoction of youth and experience. Bheke, one of the leaders of the Mumbai City camp, opined, “We have a lot of quality young players and I don’t think they can find a better set up than Mumbai City FC. This includes the Indian players, the foreign players and the coaching staff. They have the right people around them and they have been taking advantage of that.”

As a captain and mentor in the team, Bheke consistently reiterates the same advice to young players, “It’s important for young players to keep learning, regardless of whether they are getting game time or not, they have to give their best in every training session. This is the only way to keep improving.”

Being a born and raised Mumbaikar himself, Bheke feels a special connection to the team. “It’s a proud moment for me, every time I step onto the pitch and even more so when play a home game, it feels like family at Mumbai City.” He added that the return of fans to the stadium has made this season feel even more special. “It was really difficult for us last year, during the bio-bubble. No fans in the stands is like going to a party without music. It’s great to have them back and it is very motivating to be playing in sold out stadiums. I hope the fans keep coming and that we continue to grow with them. That’s what the team wants and that is what the league wants.”

As a crucial component of the Mumbai City squad, it is vital that Rahul Bheke is as fit as he can be. He works incessantly to ensure that he is available for all games. “I pay close attention to my daily routine and managing my workload, whether it is on the field or at the gym. I also ensure that I am getting the right kind of nutrition and constantly getting enough sleep. These factors really help me stay fit physically and mentally.”

Finally, Bheke attributed Mumbai’s success to the leadership and acumen of Des Buckingham, who recently signed a two-year contract extension with the club. “He has massively impacted the playing style of the team as a whole and even individual players. I’m glad that the continuity will be there and I’m sure the fans, the team, the staff, each and everyone wants the clubs to grow and I’m sure he will do that. He has helped us tremendously, to grow as players and to be better teammates. The small details that he focuses on have a big impact. The way we played in the AFC Champions League, the Durand Cup, and the way we are playing this season is because of the work that he has done with us over the last 15 months. The coach has set clear targets for us, both as a team and individually, and we have been consistently hitting those benchmarks. This is the reason we have been getting the results we desire.”

Rahul Bheke and Mumbai City will come up against another tough challenge next in the ISL as the Islanders travel to Kolkata to take on ATK Mohun Bagan on January 14 at the VYBK.