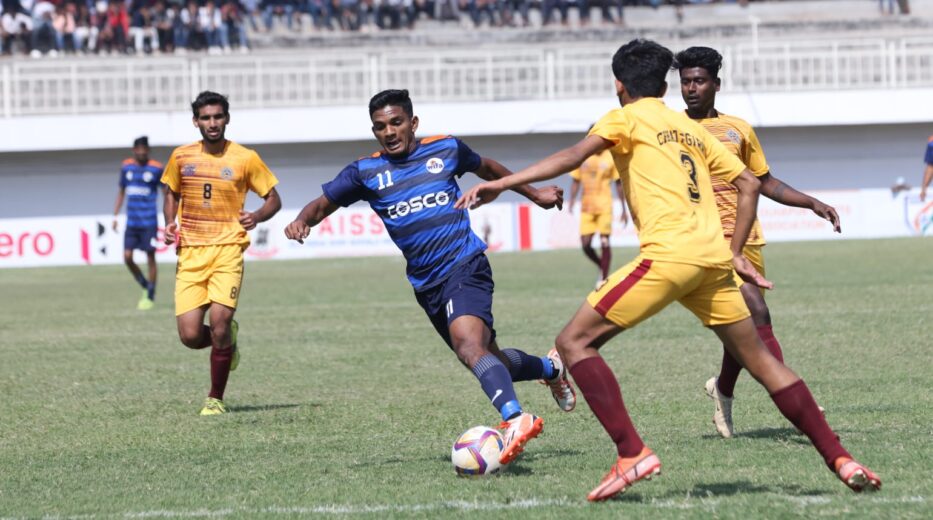 Maharashtra held off a determined Chhattisgarh team to secure a narrow 1-0 victory courtesy of a dramatic late goal by Arif Shaikh in the Hero Santosh Trophy match on Friday.

Both teams came into the game on the back of wins in their opening group games, and it was a cagey start to the match with Maharashtra having the majority of possession but no clear chances.

The first big chance came in the 14th minute when Chhattisgarh midfielder B Gaurav played a quick 1-2 before driving past the Maharashtra defense into the box. Maharashtra goalkeeper Shivam Pednekar came off his line to block Gaurav’s shot from a tight angle.

Maharashtra went close in the 17th minute when a corner saw the ball fall for Omkar Patil, whose shot was deflected goalwards by striker Himanshu Patil, but Chhattisgarh goalkeeper Rohan made a brilliant one-handed save to keep the score at 0-0.

Chhattisgarh’s Abhay Yadav tried his luck from 30 yards out in the 25th minute, but the shot went over the bar. In the 34th minute, Ashley Koli beat his marker to send a cross into the box from the left wing, GK Rohan came out to punch it away but missed the flight of the ball as it came off his defender, a disbalanced Himanshu Patil attempted a shot that went over the bar.

The second half started with Maharashtra shifting strategy to take a shot on goal more often, but none of them threatened the Chhattisgarh goal. Chhattisgarh’s Balsai Rajwade found himself in space inside the Maharashtra box in the 75th minute but failed to beat Shivam, who dived to his right to deny him the goal keeping the score 0 – 0.

In the 84th minute, having defended so well, Chhattisgarh finally conceded in a rather comical fashion as they made a joke of a straightforward clearance. Johnson Mathews’ looping ball into the box was struck by Arif near the post, and the ball deflected off the goalkeeper’s gloves but fell for the defender behind. There was a moment of confusion between the defender and goalkeeper as to whether to clear the ball long or collect it, and this allowed the Maharashtra strikers to pounce on the loose ball. There was an absolute melee as players tried to get the ball out, and Arif Shaikh finally managed to get it out on his left leg, taking the shot past the players and into the net to send the crowd into raptures as Maharashtra took the lead.

In the final minutes, Chhattisgarh won a freekick just outside the box. Maharashtra Goalie Shivam came off his line and punched away the dangerous cross into the box as the Maharashtra defense closed out the game to secure the 1-0 victory.