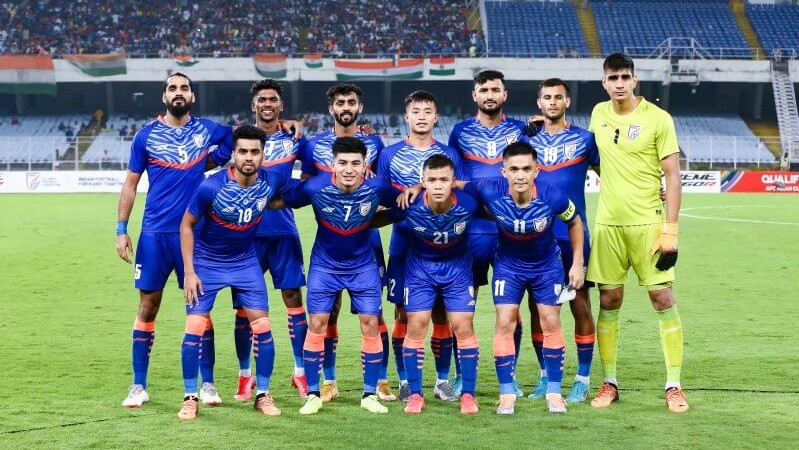 India grabbed all three points in their first game of the AFC Asian Cup Qualifiers 2023 as they comfortably defeated Cambodia by a margin of 2-0 at the Vivekanand Yuba Bharati Krirangan Stadium on Wednesday, June 8, 2022. A brace from captain Sunil Chhetri (14′, 59′) gave India the victory for the night.

As soon as the referee blew the whistle, with the crowd behind them the Indian National Team showed that they were up to the task as they pressed the Cambodia team high in their own half and giving the opposition no time to breathe. The first shot on target for India came in the second minute itself as Roshan Singh tried to hit one into the back of the net from long range.

Akash Mishra tried to pile on the pressure as he put on a beautiful shot in the 4th minute but Cambodian goalkeeper Hul Kimhuy was able to come forward and collect it. India dominated the opening stages but there was potential danger as Sandesh Jhingan was cautioned for a dangerous tackle. Cambodia created a chance in the seventh minute. They attacked down the left flank and the ball was laid off on the edge of the box but the shot from Orn Chanpolin was over the bar.

India regained complete control of the game soon after and the rewards for them followed soon as well. Liston Colaco went on a mazy run down the left in the 13th minute, beating a couple of defenders but was brought down inside the box and India was awarded a penalty. Skipper Sunil Chhetri stepped up and slotted the penalty into the left corner in the 14th minute to settle the nerves and give India the lead.

India maintained possession and never looked in doubt after scoring the opening goal. Chhetri had an opportunity to get his second goal in the 22nd minute when he found himself unmarked in the box but his header went off target. The Indian skipper was also booked in the 31st minute when the referee deemed his foot to be too high as he tried to win a ball against Choun Chanchav.

After the half hour mark, India created a flurry of chances. First, it was a cross from the left from Akash Mishra which found Sunil Chhetri following a beautiful dummy by Anirudh Thapa. However, Chhetri’s shot was a scuffed one and did not trouble the goalkeeper. Brandon Fernandes then tried to take on the goalkeeper with a long-range shot but it was over the bar.

In the 41st minute, Akash Mishra came up with a stupendous effort as he cut in from the left and unleashed a swerving shot but it was parried away by the goalkeeper. Right before the break though, Cambodia got some hope to bring the game back to level terms when they had a free-kick on the edge of the box. The shot from Keo Sokpheng was on target but easily saved by Gurpreet Singh Sandhu and the referee immediately blew the whistle after half-time.

India made a couple of changes at the break as Sahal Abdul Samad and Udanta Singh came on. In the 50th minute, Brandon put in a cross towards Chhetri but again his header was off target. However, it was third time lucky for the Indian skipper as in the 60th minute, another cross came in, this time from the left towards the far corner and Sunil Chhetri leapt up to hit a pin-point header towards the top right corner and into the back of the net. His second goal gave India the breathing space they needed.

Cambodia came up with a triple substitution just after the hour mark but it did not have any positive impact on the away team. Chhetri got a chance to complete his hat-trick in the 66th minute but his effort was blocked by defenders before he was taken off by coach Igor Stimac along with Brandon Fernandes as Glan Martins and Ashique Kuruniyan came on.

Earlier in the day, Hong Kong registered a 2-1 victory over Afghanistan in Group D which means that as things stand, India occupied the top spot in Group D followed by Hong Kong, with both teams tied on 3 points. Afghanistan and Cambodia will be looking to make a comeback with the next fixtures of Group D scheduled on Saturday, 11 June 2022.